Being colorblind to race is not the answer 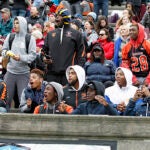 Maddox and Sommers, both associate professors at Tufts University, on Thursday presented the first of three Faculty of Arts and Sciences Diversity Dialogues for the academic year: “Exploring and Empowering Intergroup Racial Dialogue.”

The duo had the audience perform several exercises and presented research that demonstrated that most people automatically associate race with preconceived notions.

“They can be unconscious; they can persist even when we don’t want them to, and they can influence judgment and behavior. Why is racial bias so pervasive?” Sommers asked.

“Everyone is at least a little bit racist,” Maddox added.

“Humans often rely on cognitive shortcuts to get things done. We categorize people and place them into preconceived notions,” Sommers explained. “While social categorizations simplify our world, they also create inaccuracies in our perceptions.”

What are the consequences of stereotyping? The pair cited the research of Marianne Bertrand and Sendhil Mullainathan, “Are Emily and Greg More Employable than Lakisha and Jamal? A Field Experiment on Labor Market Discrimination.” In that study, resumes were sent to several potential employers. Some used “black-sounding names,” such as Aiesha, Jamaal, or Shaneka, while the others used “white-sounding names,” such as Ross, Nancy, and Ellen. Other than the names, the resumes were exactly the same. The results: It required only 10 resumes with white-sounding names on them to get a call back, while 15 resumes with black-sounding names were needed to receive a call.

“Having a white name equals eight years of additional experience on the resume,” Sommers said.

Another consequence: “One response of modern whites is to seek to appear colorblind,” Sommers said. This “is basically disingenuous … Within 150 milliseconds, we pick up on race and gender. It’s very quick.”

Sommers said the consequences of “this strategic colorblindness … leads to disengagement and disingenuousness in social interaction, differences between aspirations and reality, and can undermine the very value that diversity is supposed to confer.” Further, he said, it “signals to some individuals that their concerns and challenges aren’t valid, [and] renders group/organization members less sensitive to actual disparities.”

“Sometimes people feel anxious about interacting with a person from another race,” Maddox said. “To reduce this anxiety, they might choose to avoid situations in which a cross-race interaction is likely because avoiding that situation reduces their anxiety.

“However,” he continued, “research suggests that choosing to put yourself in situations in which you interact with a person from another race actually helps to reduce future feelings of anxiety.”

In conclusion, Maddox said, “Stereotype threat is real. Know the source of anxiety and work to diffuse it. Facing your anxiety can have long-term benefits. Make implicit processes explicit [and] strategize to minimize their impact. Understand yourself and your audience. It’s OK to talk about race … even necessary.”