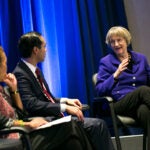 For HUD, much done, more to do

Ali Asani is disheartened by the destruction of yet another cultural treasure. When the self-declared Islamic State recently decimated the iconic Arch of Triumph in Palmyra, Syria, Asani was horrified. But he was not surprised. He says there is a worldwide “clash of ignorances” as people of different faiths and cultural traditions fail to understand and engage positively with their differences and, instead, seek to destroy the other.

Asani, a professor of Indo-Muslim languages and cultures at Harvard and faculty associate at the Weatherhead Center for International Affairs, recently sat down for an interview about these issues and about his work fostering literacy about Islam and Muslim cultures through the arts.

The conversation preceded the arrival of the Aga Khan, the spiritual leader of Shia Ismaili Muslims, who will deliver the Weatherhead Center’s Samuel L. and Elizabeth Jodidi Lecture at the Memorial Church on Nov. 12. His ideas on pluralism and the urgent need to foster better understanding between cultures have greatly influenced Asani.

Asani’s own teaching and scholarship draw on a broad range of disciplines, and he approaches the study of Islam as far more than theology and doctrines. His research focuses on Shia and Sufi devotional traditions, and many of his books examine the artistic expression of mysticism. His work fosters literacy about Islam and Muslim cultures through the arts. Asani is fond of quoting the German philosopher Johann Herder (d. 1803) who wrote “From poetry we learn about eras and nations in much greater depth than through the deceitful and miserable ways of political and military war-histories.”

Asani, who is also the director of the Prince Alwaleed bin Talal Islamic Studies Program at Harvard, has been particularly active post-9/11 in improving the understanding of Islam and its role in Muslim societies and in the public at large. He is the recipient of the Harvard Foundation medal for outstanding contributions to improving intercultural and race relations at Harvard and the nation.

ASANI: There were huge gaps of knowledge, not only about Islam but also about Africa. People just had no idea of even the basics. Their view of Islam was distorted, and this was 1977, way before 9/11. They knew nothing of its heritage, cultures, or civilizations. Most of my fellow students, for instance, did not know of Rumi. His mystical poetry, for me and for many Muslims, embeds some of the esoteric teachings of the Quran and of the Prophet Muhammad. I thought, “How is it that a person of such significance in the Muslim world is totally unknown here?”

Coming from Kenya, where I was familiar with the strong ethos of cosmopolitanism permeating the culture of the Swahili people, I was surprised to find there was nothing in the curriculum about the diverse cultures of Africa. I thought, “Where are the cultures that I come from? Where are they reflected here?”

GAZETTE: And so you decided to make a career of raising awareness about Islam?

ASANI: When I started teaching Islam, my greatest challenge lay in addressing the stereotypes and misconceptions that had profoundly influenced how my students had come to think about the tradition. I soon came to realize that one of the bigger issues I was confronting was not just ignorance about Islamic history and thought, but a prevailing global illiteracy about the nature of religion and the nature of culture and how the two intersect.

Religious illiteracy is very dangerous for our society, our world. It leads to thinking about religious traditions as monoliths. By obscuring diversity and difference, it dehumanizes and stereotypes, and it leads to prejudice and fear that endanger the whole project of democracy, since democracy cannot function if you’re afraid of your neighbors who happen to be different from yourself. Those are a few of the reasons I went into teaching about Islam.

GAZETTE: How did the arts come to play a role in your teaching?

ASANI: As I started teaching and encountered stereotypes about Muslim societies among my students, I gradually began exploring the role that the arts, broadly defined, could play as bridges to promote understanding and foster religious literacy. I also came to realize that the arts play a significant role in the way in which people experience religion. They are central — not peripheral or marginal — to the construction of knowledge. In developing this perspective, I drew upon and developed the work of my mentor, Annemarie Schimmel.

Over time, this approach came to impact my pedagogy. I encourage students to approach their class projects in a different way by engaging in art-making to capture what they are learning. We read and discuss a text, after which I ask them to respond creatively, thus making their learning personal and reflective. Such an approach offers a different way of thinking about Islam, indeed religion. It’s certainly not the conventional way in which Islam is taught at universities.

My approach is premised on the notion that as a cultural phenomenon, Islam, like any religion, is intricately tied to a web of contexts: political, social, economic, literary, artistic, and so on. It emphasizes that these contexts both influence and are influenced by religion.

GAZETTE: How do you believe Islam is perceived in popular society?

ASANI: We are witnessing an ideological competition, battle between different interpretations of the faith, and these profoundly impact popular perceptions of the faith. His Highness the Aga Khan espouses a cosmopolitan vision of Islam which embraces religious, ethnic, and cultural diversities. Other interpretations of Islam are ahistorical and acultural in their approach, often defining it through negative terms, by which I mean they define what is Islamic in purely ideological terms, by what they think it is not, that is, against a perceived theological and cultural “other.”

Several such groups are opposed to the cultural arts and music. They go around destroying our shared human cultural heritage. They have their reasons for doing so, grounded in their context, but their highly ideological and polarizing vision of Islam contrasts starkly with the Aga Khan’s — especially his promotion of the arts through various initiatives such as the Aga Khan Program for Islamic Architecture, jointly administered by Harvard and MIT, the Aga Khan Trust for Culture, which is engaged in restoring historic monuments in several cities in Africa and Asia, and the Aga Khan Music Initiative.

GAZETTE: The Aga Khan talks about how important it is that we embrace pluralism to stave off ever-escalating tensions. Could you tell us more?

ASANI: The Aga Khan talks about how the Quran itself embraces pluralism, diversity, and differences of opinion. For example, one verse says, “We have created you male and female, and appointed you races and tribes, that you may know one another,” or to that effect, depending on how one translates it. The purpose of God creating difference in human society — whether it is gender difference, or ethnic, or any kind — is supposed to be an occasion for learning and knowledge. Through that knowledge, as we engage with “the other,” we see that we’re actually engaging with other viewpoints and in the process coming to know ourselves better. It’s not meant to eliminate difference. It’s used to celebrate difference and engage with it in a very positive way.

GAZETTE: Do you feel the political climate here in the United States is becoming worse?

ASANI: We are witnessing increasing polarizations in the United States. If you look at the economic inequities, they’ve just grown. The gap between the rich and the poor is very stark now, and the middle class has shrunk. We see movements, such as Occupy, protesting against the banks and big business. The Black Lives Matter campaign highlights ongoing racial profiling and brutality against African-Americans and peoples of color by the police, notwithstanding the decades of progress made by Civil Rights Movements. Muslim-Americans have become targets of suspicion, fear, and prejudice by prominent politicians and certain media pundits. We see a citizenry that lacks confidence in a deeply divided Congress, paralyzed by partisan politics.

Such tensions undermine the very nature of democracy and endanger the nation’s harmony. In this regard, the Aga Khan’s call for the need globally to promote more-inclusive nations that care about the quality of life of all their citizens, regardless of race, ethnicity, and religious creed, is of growing relevance to our nation. It is a message that of course resonates well with the pluralist ideals embedded in the Constitution and the civic culture of the nation.

GAZETTE: How do you perceive the state of affairs in a global sense?

ASANI: There is a growing exclusivist mentality in many societies that is in large part a reaction against globalization and the increasing number of failed or failing nation-states. If you look at the Middle East, exclusivist mentalities have developed in recent years as nationalism has imploded. As a result, an “us-against-them” mentality has become deeply embedded in the region, often manifesting itself in sectarian tensions and violence. Groups like ISIS have emerged as populist movements, drawing support for their cause from a sense of a loss of power and humiliation, and also from those who seek a new supranational political order. They regard nation-states created or supported by the West, such as Iraq and Afghanistan, as foreign constructs that are governed by ruling elites who serve the interests of foreign masters and fail to meet the needs of their citizens.

I would also say that this exclusivist mentality is also manifest in the United States. With the elections approaching, you have populist movements that are appealing to certain segments of American society who feel disempowered and regard the current political establishment and its structures as failing to reflect their narrowly constructed vision of America and what it means to be American. This loss of power and the desire to be a winner is creating hatred and intolerance for cultural and religious differences. Unfortunately, at the present time, Muslims have become the primary victims of this fear and prejudice.

You see it also in Europe, for example in France, with the National Front of Jean-Marie Le Pen targeting Muslims. There is a particular view of what it means to be French, which doesn’t have much room for cultural diversity. You see another manifestation of exclusivism in parts of the Middle East, such as in the Gulf States, where Pakistani and Bangladeshi workers are mistreated and exploited by ruling elites, and have few rights, notwithstanding the fact that they are Muslim and co-religionists.

GAZETTE: Do you see any realistic solutions?

ASANI: There are a number of solutions. We must ask: How do you create societies which at a basic level address issues of exclusion that affect people’s quality of life? Look at poverty. The Aga Khan places so much emphasis on pulling people out of poverty, which makes them feel included rather than excluded. When hope replaces despair, people must feel included — economically, politically, and socially — in terms of health care and education. We must provide equal access for citizens regardless of their background. It is so fundamental to create societies that are pluralistic, ones that embrace difference — and that we have governments that are committed to providing a decent quality of life for all citizens.

You see these challenges in America today and all over the world. You see the rise of exclusivism, and you see these constructions of Islam as “the other”— the dehumanized “other.” These types of constructions are very dangerous. As the Aga Khan demonstrates, it is important to provide an alternate discourse.

People are beginning to define themselves not on the basis of who they are and what they represent, but on the basis of who they are not. Our world is filled with groups that maintain this exclusivist mentality. We must seek solutions to the “clash of ignorances” that breeds this polarized and divisive mentality. We must help people become literate and pluralistic in their thinking about religion and culture. Only then can we truly proclaim e pluribus unum.