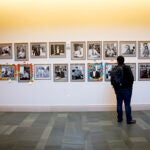 Blair’s wide-ranging scholarly interests include the history of the book and reading, the history of interactions between science and religion, the significance of archival work, and the cultural and intellectual history of early modern Europe. She has written extensively on the tools that 16th- and 17th-century scholars devised to produce, store, and sort intellectual work and information from a variety of sources.

“Ann Blair’s extraordinary scholarship and teaching illuminate timeless questions and historical practices at the very heart of what scholars do and why what they do matters to the world,” said Harvard President Drew Faust. “She navigates a wide domain of disciplines and ideas with unusual dexterity, and she writes with rare perspicacity about how we convey knowledge to one another across place and time. It seems especially fitting that she occupy a University Professorship so long associated with Harvard’s library, given how fundamental the history of the book is to her own work and how fundamental the library is to our work across the University.”

A greatly admired teacher, Blair has taught courses spanning many topics, ranging from early modern France to reason and faith in the West to the history of the book and reading. She has also been recognized as a talented mentor on several occasions. She was named a Harvard College Professor in 2009 for outstanding undergraduate teaching and in 2014 received the Everett Mendelsohn Excellence in Mentoring Award, which is given for exceptional mentoring of graduate students. Since 2011 she has served as director of undergraduate studies in the Department of History, a role in which she shapes and guides the curriculum and degree path for undergraduates. Blair has three times been adviser to seniors who went on to win the Hoopes Prize for outstanding senior thesis; Blair herself won that prize as a Harvard College student.

“I am deeply honored by this appointment and thrilled that it is defined around the love of the libraries at Harvard and their holdings,” Blair said. “Harvard’s libraries are home to millions of books from all around the world and to other media, too. All of us here are truly privileged to have this world-class resource on our campus.

“I look forward to continuing to develop book history broadly by studying how texts were made, circulated, used, and transmitted in various contexts. I am especially grateful to the many colleagues, graduate and undergraduate students, visiting scholars, and book professionals across many disciplines who have formed such a vibrant community here focused on the study of the material forms of texts past, present, and still to come.”

Blair received her A.B. from Harvard in 1984 (summa cum laude, Phi Beta Kappa) with a concentration in history and science. She went on to earn an M.Phil. degree in the history and philosophy of science from the University of Cambridge in 1985 and a Ph.D. in history from Princeton University in 1990. Her first academic posts were as a lecturer (1991-92) and visiting associate professor (1992-93) in the Department of the History of Science at Harvard. She spent the next four years at the University of California, Irvine, before returning to Harvard in 1996 as an assistant professor of history and of history and literature and the John L. Loeb Associate Professor of the Social Sciences. Blair was named the Henry Charles Lea Professor of History in 2005.

She is the author of two books, “The Theater of Nature: Jean Bodin and Renaissance Science” (1997) and “Too Much To Know: Managing Scholarly Information Before the Modern Age” (2010), for which she was awarded a Walter Cabot Channing Fellowship by Harvard’s Faculty of Arts and Sciences (FAS). She has also co-edited several volumes and published numerous articles. She is currently working on a book focusing on amanuenses, the mostly hidden assistants who worked with scholars and authors in early modern Europe.

Outside of Harvard, her scholarly contributions have garnered many honors. She won a MacArthur Foundation Fellowship in 2002, is a member of the American Philosophical Society, and has received fellowships from the Mellon Foundation, the Guggenheim Foundation, and the National Endowment for the Humanities. In 2014 Blair delivered the Rosenbach Lectures in Bibliography at the University of Pennsylvania on the role of amanuenses in early modern Europe.

In addition to her teaching responsibilities and research pursuits, Blair has served on a number of FAS committees, including the Faculty Council and its Docket Committee, the Graduate Policy Committee, the Committee on Graduate Education, the Library Advisory Working Group and Library Committee, and a Harvard committee related to Rhodes and Marshall scholarships. She has also served as the faculty adviser in the humanities for the Radcliffe Institute for Advanced Study, where she was a fellow in 2014-2015, and as vice president and then president of Harvard’s Phi Beta Kappa chapter. She also chaired the committee charged with awarding the Harvard Library’s first Pforzheimer Fellowships.

The Carl H. Pforzheimer University Professorship is generally awarded to a scholar in the humanities or quantitative social sciences who has a significant interest in libraries, books, and texts of all kinds.