An indictment of Ebola response 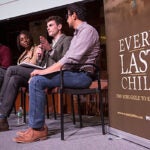 The fading of polio

An independent group of 19 international experts, convened by the Harvard Global Health Institute and the London School of Hygiene and Tropical Medicine (LSHTM), today issued a scathing analysis of the global response to the 2014-15 Ebola outbreak in West Africa.

The members of the Harvard-LSHTM Independent Panel on the Global Response to Ebola said that while the 2014-15 Ebola outbreak “engendered acts of understanding, courage, and solidarity,” it also caused “immense human suffering, fear and chaos, largely unchecked by high-level political leadership or reliable and rapid institutional responses.”

The report, published in the prestigious British medical journal The Lancet, is especially hard on the World Health Organization (WHO), which the panel contends failed to provide the leadership and support needed to deal properly with the outbreak of hemorrhagic fever that infected more than 28,000 people and claimed more than 11,000 lives.

The authors of the report, who were affiliated with, but functioned independently from, such disparate organizations as the Council on Foreign Relations, Médecins Sans Frontières, Indiana University law school, and the AIDS Health Care Foundation, reminded readers that the Ebola epidemic “brought national health systems to their knees, rolled back hard-won social and economic gains in a region recovering from civil wars, sparked worldwide panic, and cost at least several billion dollars in short-term control efforts and economic losses.”

“The most egregious failure was by WHO in the delay in sounding the alarm,” said Ashish Jha, director of the Harvard Global Health Institute, K.T. Li Professor of International Health at the Harvard T.H. Chan School of Public Health, and a professor of medicine at Harvard Medical School. “People at WHO were aware that there was an Ebola outbreak that was getting out of control by spring … and it took until August to declare a public health emergency … Those were precious months,” said Jha.

The panel was co-chaired by Professor Peter Piot, director of the LSHTM and co-discoverer of the Ebola virus. Piot said, “We need to strengthen core capacities in all countries to detect, report, and respond rapidly to small outbreaks, in order to prevent them from becoming large-scale emergencies. Major reform of national and global systems to respond to epidemics are not only feasible, but also essential so that we do not witness such depths of suffering, death, and social and economic havoc in future epidemics. The AIDS pandemic put global health on the world’s agenda. The Ebola crisis in West Africa should now be an equal game-changer for how the world prevents and responds to epidemics.”

Liberian Mosoka Fallah of Action Contre la Faim International and a member of the panel said, “The human misery and deaths from the Ebola epidemic in West Africa demand a team of independent thinkers to serve as a mirror of reflection on how and why the global response to the greatest Ebola calamity in human history was late, feeble, and uncoordinated. The threat of infectious disease anywhere is the threat of infectious disease everywhere. The world has become one big village.”

The global response to Ebola is being examined by a number of different panels, Jha said, including a group at WHO and another at the United Nations. During the height of the epidemic in fall, 2014, Jha met with Julio Frenk, then the dean of the Harvard Chan School, and Suerie Moon, research director and co-chair of the Harvard Kennedy School’s Forum on Global Governance for Health, and a Harvard Chan faculty member. Together, they “decided this deserves independent examination; we can’t let this happen again,” Jha said.

“The Ebola outbreak is a stark reminder of the fragility of health security in an interdependent word,” the report reads, “and of the importance of building a more robust global system to protect all people from such risks.

“A more humane, competent, and timely response to future outbreaks requires greater willingness to assist affected populations, and systematic investments to enable the global community to perform four key functions: strengthen core capacities within and among countries to prevent, detect, and respond to outbreaks when and where they occur; mobilize faster and more effective external assistance when countries are unable to prevent an outbreak from turning into a crisis alone; rapidly produce and widely share relevant knowledge, from community mobilization strategies to protective measures for health workers, from rapid diagnostic tools to vaccines; [and] provide stewardship over the whole system, entailing strong leadership, coordination, priority setting, and robust accountability from all involved actors.”

Though it pulls no punches in its criticism of the ways institutions and nations responded to the Ebola crisis, the Harvard-LSHTM report is also a positive document, offering 10 concrete recommendations to strengthen public health systems and future responses.

Those recommendations fall into four areas: preventing major disease outbreaks; responding to outbreaks; producing and sharing data, knowledge, and technologies; and improving the governance of the global health system, “with a focus on the World Health Organization.”

One recommendation is that WHO create a dedicated center “for outbreak response, with strong technical capacity, protected budget, and clear lines of accountability,” and that that center be governed by a separate board independent of the WHO bureaucracy.

“Our primary goal is to convince the high-level political leaders, north and south, to seize the moment to make necessary and enduring changes to better prepare for future outbreaks, while memories of the human health costs of inaction remain vivid and fresh,” the report said.

“There is a high risk here of not learning our lessons,” said Jha. “We’ve had outbreaks like this before, and often you get thoughtful reviews, and august bodies that look at it, and people say, ‘We will get to this right away,’ and then other things draw our attention. I think we owe it to the more than 11,000 people who died in West Africa to see that that doesn’t happen this time.”