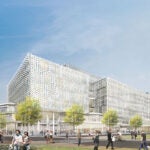 Diane Quinn has been named executive director of the American Repertory Theater (A.R.T.), Harvard University and the Board of Trustees of the A.R.T. announced Monday.

Beginning Dec. 1, Quinn will assume the role of the 35-year-old institution’s executive director. In this new position, she will work with Diane Paulus, who continues as artistic director of the A.R.T.

Board Chairman Steve Johnson remarked, “After an extensive international search and many months of speaking to colleagues inside and outside of the theater world, we are thrilled to have found Diane Quinn. Her 20 years of experience in nonprofit management, pedagogy, and building and operating theatrical organizations will align well with the role the A.R.T. plays in Cambridge as the professional theater on Harvard’s campus and globally as a leading institution in the performing arts.”

Johnson continued, “Diane’s financial, strategic, and leadership acumen will bring enormous value to the A.R.T. We are fortunate to have her join our community.”

“The A.R.T. has an incredible team in place that has shepherded the institution through a period of tremendous growth,” said Paulus. “The board and the University knew how important it was to find someone who could step in seamlessly to continue all of the extraordinary work of the institution. Diane Quinn’s background perfectly combines the expertise we need to take the theater into its next phase and help chart the organizational strategy for the next 10 years.”

Quinn said, “I am very pleased to be joining the amazing team at A.R.T., where I have had the privilege to meet with members of the board, the staff, and Harvard over the past several weeks. I look forward to continuing with the important work of this organization and the strong partnership with Harvard.”

A veteran of the arts, Quinn’s many positions have included founding producer of Soulpepper Theatre Company and Festival of Classics, coordinator of the Arts Administration Program at the University of Toronto, and executive director of Toronto Women in Film and Television.

Most recently she served as senior vice president of creative and artistic operations at Cirque du Soleil, where she was responsible for managing the artistic quality of all shows globally. Quinn joined Cirque in 2004 and held a series of positions with it, including public services director, director of artist management, and company manager in Las Vegas.

Volunteerism in the cultural sector has also been key for Quinn. She was the board president of the Toronto Theatre Alliance and board vice president for Women in Film and Television, and served on the Canadian Association of Arts Administration Educators. She has been invited to jury for the Ontario Arts Council and for the Fringe Festival`s inaugural playwriting selection committee, and has written “The Indie Theatre Producer’s Guide.”

Quinn is a graduate of the University of Toronto honors arts specialist degree program, with a concentration in arts management and drama.