A focus on fairness 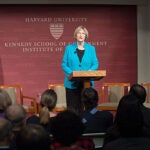 Study examines how children in various countries react to inequity

Fairness may be a necessity of human civilization, allowing people to share valuable resources. But does it develop the same way, and at the same pace, across all human cultures?

A new Harvard study suggests that the answer may be no.

The study, described in a paper released today in the journal Nature, was done by senior author Felix Warneken, the John L. Loeb Associate Professor of the Social Sciences at Harvard, and co-authored by two former Harvard doctoral students, Peter Blake, now an assistant professor of psychology at Boston University, and Katie McAuliffe, an assistant professor of psychology at Boston College. Other contributors include Richard Wrangham, the Ruth B. Moore Professor of Biological Anthropology at Harvard; Elizabeth Ross, co-master of Currier House; undergraduate students Aleah Bowie and Hurnan Vongsachang; Warneken lab manager Lauren Kleutsch; and Karen Kramer, a faculty member at the University of Utah.

“We had run studies exploring this idea — what we call inequity aversion — in the Boston area, but this type of study, looking at the cross-cultural specificity of it, had never been done before,” said Warneken.

“In some trials, the distribution was one piece of candy for the actor and four for the recipient, and in others it was the other way around,” Warneken explained. “If the actor decides to accept the distribution, they pull a green handle, the platforms tilt out, and they get the candy. If they reject it, they pull a red handle, the platforms tilt in, the candy falls into a bowl, and nobody gets any.”

In tests conducted in the Boston area, Blake and McAuliffe found that children’s ages influenced how they reacted to various forms of inequity.

“That was a somewhat surprising finding, that kids were willing to make that type of sacrifice,” Blake said. “When we asked them why they did it, they said it was not fair.”

Spurred by those results, Blake and McAuliffe set out to understand whether inequity aversion could be found in other cultures, eventually running tests in Canada, India, Mexico, Peru, Senegal, Uganda, and the elsewhere in the United States.

“Given that we see disadvantageous inequity aversion so young in the U.S., we thought it was more likely we would see it in all cultures, and indeed, that’s what we found,” McAuliffe said. “There was some variation in the age when it emerged, but we saw it everywhere.”

Rejections of allocations that favor the child, however, were observed in only three countries sampled: the United States, Canada and Uganda.

“Given our previous results, you might not be terribly surprised to see it in the U.S. and Canada, but Uganda seems like an unusual finding,” McAuliffe said.

The dual finding, Blake and McAuliffe said, suggests that while disadvantageous inequity aversion may be a human universal, the opposite appears to be influenced by cultural norms.

“This is a nice first step, and a large one, toward making the case that disadvantageous inequity aversion looks like a universal feature,” Blake said. “But it’s important to note that we were limited in the cultures we tested. We didn’t test hunter-gatherers, for example, so there’s always a possibility that we may not see this phenomenon in those cultures.”

Importantly, Warneken, Blake, and McAuliffe said, the study lays a foundation for future work by allowing researchers to target specific countries that may produce interesting results and to think deeply about how cultural differences may influence the development of fairness behaviors.

“We conducted this study on a shoestring budget, which meant we worked with collaborators who already had access to the sites,” Blake said. “Now that we have a picture of what this looks like, and recognize that there are two different processes at work here, we can be more targeted on which cultures we want to study in the future.”

One idea going forward, Warneken said, would be to start with cultures in which adults have shown large differences in inequity aversion, and investigate whether those differences are also seen among children.

“We are not claiming that this advantageous inequity aversion does not exist in these cultures, it’s only that we do not find it in childhood and early adolescence,” Warneken said. “It could just be that this is something kids in the U.S., Canada, and Uganda are pushed towards early on, and we can speculate that in other cultures this is something that emerges later, when they are adults and engage in more of these economic exchanges.”