What drones can do 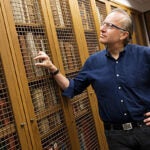 With the whine of furious bees, two drones raced three times around Harvard Stadium, rolling and tumbling before a crowd of about 500, then swooping through a goalpost and landing on the artificial turf.

But that wasn’t the coolest part.

The coolest part was that the spectators could see what drone pilots were seeing as they navigated their pigeon-sized crafts via remote control and special goggles. Screens set up for the audience, nestled under a net tent to guard against a wayward drone, showed every swoop and swerve in real time. This allowed spectators to understand why competitors in the newly formed Drone Racing League say they feel that they are flying “like Superman.”

The demonstration culminated “Making Robotics Fly,” an Oct. 10 event that showcased applications for drones and drone technology. On hand were representations from half a dozen drone-related companies, plus robotics engineers from Massachusetts Institute of Technology and students, children, and others fascinated by the potential of unmanned aerial vehicles.

The event was staged as part of HUBweek, a collaboration among Harvard University, MIT, The Boston Globe, and Massachusetts General Hospital designed to showcase innovations and ideas in this region’s scientific, artistic, and technology communities.

Saturday afternoon’s drone session was organized by Harvard Business School (HBS), the Harvard John A. Paulson School of Engineering and Applied Sciences, and the investment firm XFund. Their sponsorship underscored the primary goal of the event: to bring together engineers and entrepreneurs and see what the two perspectives could produce in the emerging field of drones.

“This style of event has never been done before,” said Logan Campbell, an organizer and co-founder of the drone-consulting company Aerotas, which he launched during his last year before graduation from HBS. Usually, he said, drone events are held in tents, so people don’t get a sense of how delivery drones operate. “So we flipped that around; we put the people in the tent to let the drones show off their technology.”

During the event, a drone from the West Coast-based Matternet delivered a T-shirt across the field to the event’s mistress of ceremonies, Sally French. French, the social media editor of the Wall Street Journal digital network who dubs herself “Drone Girl,” spoke of the power when engineers and entrepreneurs — “nerds and used car salesmen,” as she put it — get together.

In another demonstration, Harvard alumnus Michael Kolowich, co-founder of the Boston-based DigiNovations, showed off one of the company’s video drones and even staged a crowd “selfie” via drone.

The presenters, however, mostly focused on the practical uses for drones, not just their “cool” features. Matternet, for example, has been testing drone delivery in Switzerland, and company representatives spoke of creating systems to deliver medicine to remote Third World communities without transportation infrastructure. Drones have been used to find lost hikers, to monitor crops, and even to collect whale DNA, French said.

Drones “have a wide variety of applications: in agriculture, in surveillance, in construction, in security,” said Hugo Van Vuuren ’07, XFund co-founder. “We’re trying to show the public how this burgeoning new industry is coming together.”

An obstacle to wider public acceptance of drones, Campbell said, is the word itself, which many Americans associate with military applications. But “this isn’t military technology anymore,” he said. “We are focusing on the positive, commercial aspects of it and how this technology can help people.”

“Our drones are all about speed,” he told the crowd. “They are as small and light as possible. They are designed with carbon fiber frames to make them more durable.” Unlike camera drones, racing drones aren’t stabilized, and the video feed is low-definition to make it as fast as possible for the pilots. Moreover, “If you’re not crashing, you’re not racing.”

Horbaczewski’s mere suggestion of a future drone race between Harvard and MIT was enough to send a thrilled buzz through the crowd.