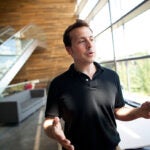 They were intended to be grand public thoroughfares, tributes to the vision and legacy of one of the country’s most important leaders. But 50 years after Martin Luther King Jr. marched from Selma to Montgomery, Ala., the American streets named to honor the slain Civil Rights icon are often corridors of unyielding socioeconomic struggle, bypassed by community investment and development.

“The popular perception is that these streets are not worthy of King’s name. They’re segregated, they’re poor, there’s vacant property everywhere,” said Daniel D’Oca, design critic in urban planning and design at the Harvard Graduate School of Design (GSD). “And in our research we’re finding that that is partially true … but I think we’re also super-inspired by what we saw. The people who live and work on these streets are amazing, and they really inspired us with some of their ideas.”

Reacting to a St. Louis nonprofit group dedicated to improving the quality of life on the nearly 900 streets across the nation named for King, D’Oca began teaching a new studio course this semester that asks students to use urban planning and design, architecture and landscape architecture to help local residents begin to remake their neighborhoods.

“St. Louis has an interesting and very terrible history because it’s a place that has either invented or perfected a lot of racist, exclusionary tools. It’s been really creative in how it’s kept white and black populations apart,” said D’Oca.

He attributes some of the decline along MLK streets to planning and development tactics such as racially driven zoning, urban renewal, disinvestment in high-poverty areas, federal mortgage insurance practices that rewarded “white flight” to the suburbs, and “red-lining” by banks that frequently denied residents and businesses in predominantly African-American neighborhoods mortgages and loans.

To get a better sense of local conditions, the GSD class focused on Martin Luther King Drive in St. Louis and Martin Luther King Avenue in Washington, D.C. Earlier this month, the class walked the streets in both cities, meeting with residents, business owners, community development and housing groups, local aldermen, and city and police officials to understand better how these areas have evolved, what the barriers are to improvements, how residents perceive their neighborhoods, and what they would like to see happen.

“I want[ed] to get the students to talk to as many people as possible, both so that they understand what people’s hopes and fears are for these two corridors but also for them to understand the political climate,” said D’Oca.

The GSD group met a woman who ran a tailoring business in St. Louis, but because the buildings on either side of her shop were abandoned and had fallen into neglect, she could not get insurance. “That’s not her fault, and she’s paying the price,” said D’Oca.

The trip was everything from exciting and fun to sad and confounding for those involved.

“It was an incredibly powerful experience, one that I most likely would never have had without this studio,” Jeffrey Knapke, who’s pursuing a master of architecture degree in urban design, wrote in an email. “I’ll admit that I probably would not have ventured into these rough areas on my own prior to this trip, perhaps out of fear. What became clear almost instantly is that the people there really love their neighborhoods and desperately want to see them bounce back.”

Sourav Biswas, who is studying landscape architecture, said he was moved by seeing the staggering scope of the abandoned buildings and vacant lots in St. Louis left by the exodus of 500,000 people to the suburbs over the last 50 years, but also by what he heard from hopeful residents looking for opportunities to restore the neighborhood and start businesses.

“We have access to GIS [Geographic Information System] data. We have access to all these other tools that let us have a top-down approach,” said Biswas. “But to be able to really listen became the key for how we could find projects that are genuinely useful to the community.”

Since the fieldwork, D’Oca and his students have been meeting to determine how best to collaborate on a plan that will be meaningful and can be carried on by the community after the class finishes.

“We don’t want to end up with the same traditional deliverables that happen in every design studio, where if you’re 13 students, you have 13 projects and you just design those projects on a rolling board to a jury at the end,” said Biswas.

Eric Shaw, M.U.P. ’00, director of D.C.’s office of planning, strongly supports the driving force behind the class, noting that little attention has been paid to how cities can articulate the needs of communities and how to change them through the language of design.

“How do we understand the teachings of Martin Luther King as a means to facilitate a community development/community design program?” said Shaw.

A white-hot real estate market serving professionals earning close to the District’s $100,000 annual median income has rapidly swept gentrification across the city and is now poised to transform — for better or worse — Ward 8, a predominantly African-American area where the annual median income is just $35,000.

“The studio is going to help us better understand how to make sure that our policies and activities are contextual to that place and in line with our equity goals,” said Shaw, who has so much confidence in the students that he plans to put one or two of their finished ideas before Mayor Muriel Bowser.

Ultimately, D’Oca hopes the students will not only propose effective innovations to improve neighborhoods in each city, but will carry a sense of justice and racial equity into their work once they leave GSD.

“My feeling is planners and architects have helped us get into the mess we’re in and are really complicit in creating the kind of segregated, imbalanced communities that we have,” he said. “If we can create these problems, hopefully we can create the solutions, too.”