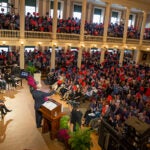 Harvard Provost Alan M. Garber has appointed Mark C. Elliott, Mark Schwartz Professor of Chinese and Inner Asian History and current director of the John King Fairbank Center for Chinese Studies, as vice provost for international affairs. Elliott replaces Jorge Dominguez, who stepped down at the end of his appointed term in June to return his focus to teaching and research. Elliott took up the role on Sept. 1.

“Among a number of excellent candidates, Mark’s name was often mentioned by faculty as we undertook the search to replace Jorge,” Garber said. “His knowledge and experience of Asia, his administrative abilities, and his dedication to teaching as well as research made him an obvious candidate for this role at time when Harvard’s international profile is expanding greatly. He is also thoughtful, respected, imaginative, and deeply collegial. For all of these reasons, he is an ideal fit for the position.”

With an ever-expanding global footprint, Harvard needs oversight and coordination of the myriad international activities that faculty and students undertake abroad. At the same time, the University is working with faculty to develop and execute a strategic vision for becoming more “intentionally global.”

“Harvard’s engagement around the world has broadened and deepened considerably over the past decade, and more faculty and students than ever before are conducting research abroad,” President Drew Faust said. “I am grateful to Jorge Dominguez, whose excellent counsel and guidance created new opportunities for more deliberate coordination, and I am eager to work with Mark Elliott to continue developing creative and thoughtful ways of supporting international efforts across the University.”

Working with the president, the provost, School deans, members of the faculty, and the senior adviser to the president for global strategy, the vice provost for international affairs plays a critical role in advancing and overseeing the University’s international academic initiatives. The vice provost collaborates with Harvard community members and groups to stimulate and facilitate the development of international research and teaching activities, to expand opportunities for study abroad, and to build relationships that will bring more international scholars and students to Harvard. In that role, Elliott will serve as the University’s representative in negotiating agreements with foreign governments, receiving senior-level international delegations, and representing Harvard to peer institutions and alumni worldwide.

“The opportunity to help shape our growing portfolio of international engagements is a rare chance to have a major impact on Harvard’s future as we set about inventing the university of the 21st century,” said Elliott. “This will increasingly be a global enterprise, gathering minds from all corners of the Earth to places like Harvard, places expressly structured to facilitate meaningful and lasting exchange, understanding, and discovery across disciplines and cultures. As vice provost for international affairs, I look forward with excitement to working closely with colleagues across the University to achieving our common goal of unsurpassed excellence in scholarship, research, and teaching.”

A distinguished historian with joint appointments in the department of East Asian languages and civilizations (EALC) and the department of history, Elliott focuses his research on the history of China after 1600, the history of relations between China and Inner Asia, and Manchu studies. Beyond his regional interests, Elliott’s research also considers broader questions of ethnicity, translation, cartography, and the frontier. His first book, “The Manchu Way: The Eight Banners and Ethnic Identity in Late Imperial China,” based on previously unexamined Manchu-language archives, is an influential study in the “new Qing history,” an approach that emphasizes the importance of Inner Asian political and military institutions in giving a distinctive imprint to China’s last imperial state and the modern Chinese nation that emerged from it. He is also the author of “Emperor Qianlong: Son of Heaven, Man of the World,” and co-editor of “New Qing Imperial History: Making Inner Asian Empire at Chengde.” In addition, he has published numerous articles, including in leading French, Chinese, and Japanese journals.

Elliott is also a dedicated teacher. He teaches courses on the history of late imperial and modern China, the nomad encounter in Chinese history, the Silk Road, historical theory and research methods, as well as literary Manchu, and has contributed to ChinaX, Harvard’s popular online course on Chinese history. He has advised numerous Ph.D. and master’s theses, with students in teaching and research positions at universities across the United States, Asia, and Australia.

Appointed director of the Fairbank Center for Chinese Studies in 2013, Elliott has reenergized and reinvigorated faculty engagement with the center, developing the Digital China Initiative, a growing assortment of new projects, research tools, and forums that seek to exploit the possibilities afforded by the digital revolution, including the Digital China Lab, a collaborative workspace that introduces participants — including graduate students and faculty — to digital tools that they can then apply to their own research. As part of this initiative, Elliott has helped to create a new vision for the Fung Library as an International Digital Research Commons.

With the Asia Center and the Center for African Studies, he has led the Fairbank Center in opening up a new Africa-China initiative, and, with the South Asia Institute, has begun a series of workshops on meritocracy in China and India. Elliott has expanded the traditional range of Chinese studies by exploring new partnerships with the Harvard China Project on the Environment at the John A. Paulsen Harvard School of Engineering and Applied Sciences and the Center for Green Buildings and Cities in the Graduate School of Design.

A conscientious University citizen, Elliott serves on the Faculty Council in the Faculty of Arts and Sciences, chairs the committee on the Ph.D. in history and East Asian studies, and is director of graduate studies for the committee on the Ph.D. in Inner Asian and Altaic studies. Apart from extensive service on numerous departmental committees in EALC and history, he has also helped to advance broader University interests as a member of the steering committees for the Harvard China Fund and the Asia Center, as well as the Faculty Advisory Committee on Global Institutes, the University Development Office’s China Strategy Group, and the Prince Alwaleed bin Talal Islamic Studies Committee.

Elliott brings to the position a notably cosmopolitan background. He has lived for extended periods in Taiwan, mainland China, Japan, and Poland, as well as for shorter periods holding special academic appointments in France, Singapore, Australia, and South Korea. A fluent speaker of Chinese, Japanese, French, and Polish, Elliott also has a reading knowledge of literary Chinese, Manchu, classical Mongolian, Russian, Italian, and German.

For his new role, Elliott said, “It’s time to add a few more languages to the list.”