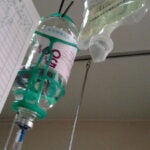 Medication errors found in 1 out of 2 surgeries

A new, highly effective drug-device combination for treating life-threatening blood clots in stroke patients is being developed by a team of researchers at Harvard’s Wyss Institute and the University of Massachusetts’ New England Center for Stroke Research.

The study, which will appear in the December issue of the journal Stroke, describes a novel method to quickly dissolve clots that completely obstruct blood vessels in the brain.

The team’s research, which is co-led by Wyss Institute founding director Donald Ingber and University of Massachusetts Medical Professor of Radiology Ajay Wakhloo, combines an injectable clot-busting nanotherapeutic that targets blockages with an intra-arterial device that restores blood flow to obstructed vessels.

The Wyss Institute for Biologically Inspired Engineering at Harvard University had already discovered novel nanotherapeutics for clearing obstructed blood vessels. Its nanotherapeutic is composed of an aggregate of biodegradable nanoparticles coated with a clot-busting drug called tissue plasminogen activator (tPA), which mimics the way blood platelets behave inside our own bodies. When blood vessels narrow, the shear force of blood flow increases at that location to produce a physical cue that causes platelets to stick to the vessel wall. Similarly, the nanotherapeutic reacts to fluid shear force, releasing tPA-coated nanoparticles in these narrowed regions where vessels are partially occluded, binding to the blood clot and dissolving it away.

But until now, the mechanically activated nanotherapeutic would not be effective in complete vascular blockages where there is no blood flow, as is the case for most stroke patients. The most effective treatment for stroke today is known as a stent-retriever thrombectomy procedure, originally described by Wakhloo and his colleague Matthew Gounis, associate professor of radiology at U.Mass. The procedure involves placing a small tube through the blockage, passing a closed stent through it, and then opening the stent to physically pull the large blood clot out of the vessel.

“Even with the retriever thrombectomy procedure, not all clots can be removed with a successful outcome,” said Gounis. “Clot fragments can be dislodged, which can lead to microclots and tissue damage downstream in the brain circulatory system, and physical dragging of the stent through the vessel can potentially be damaging as well.”

Instead, the new advance describes using the stent not to drag out the clot, but to create a narrow channel restoring blood flow through an opening in the center of the vascular blockage. Doing so creates a high level of shear force generated by restored flow, activating the nanotherapeutic to release and target the clot-busting drug along the opened channel in the clot. After the blood clot is fully dissolved, the stent is re-sheathed and harmlessly removed from the vessel. If during the process any clot fragments break off and travel through the circulatory system, the drug-coated nanoparticles will remain bound to them and continue to dissolve them locally wherever they go.

“What’s progressive about this approach is that the temporary opening of a tiny hole in the clot — using a stent device that is already commonly used clinically — results in a local rise in mechanical forces that activate the nanotherapeutic to deploy the clot-busting drug precisely where it can best do its job,” said Ingber, who is also the Judah Folkman Professor of Vascular Biology at Boston Children’s Hospital and Harvard Medical School and professor of bioengineering at the Harvard John A. Paulson School of Engineering and Applied Sciences.

In clinically relevant large-animal studies, the team has demonstrated that the drug-device combination works very efficiently, showing that it dissolves clots that fully occlude brain blood vessels that are the same size as they would be in humans.

“This has been a great collaboration between experts in the field of treating stroke and experts in mechanobiology and bioengineering,” said co-first author of the study Netanel Korin, a former Wyss technology development fellow and current assistant professor in biomedical engineering at the Technion, Israel, who first described the nanotherapeutic with Ingber in a 2012 Science publication. “We hope that one day it will have a positive impact on patients suffering from a range of medical crises resulting from blood-clot occlusions.”