Art that lights the mind 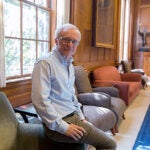 For many decades, impressionist paintings have beguiled viewers. Their brushstrokes of color play with how light and shadow can transform a landscape or a cathedral’s façade at dawn, an afternoon gathering under a canopy of trees, or a river at sunset.

But what is happening with our eyes when we admire those haystacks shining in the late-day sun, or that sea of poppies that seems to sway in the breeze? Above all, our brains are busy sorting incoming information that arrives in “the pattern of light that ends up on your retina,” said Harvard neurobiologist Margaret Livingstone.

And sometimes that information likes to try to trick us. When a picture appears to move, the eyes are actually trying to detect the relative luminance (how bright an object appears) between a painting’s colors. If the colors are close in luminance, Livingstone said, things appear in motion.

In “Impression, Sunrise” Claude Monet’s evocative, hazy pink and blue painting of daybreak over the port of Le Havre, France, “the sun is shimmery, almost vibrates,” said Livingstone, “and it is precisely … the same luminance as the background sky.”

“The sparkly, vibrant quality in pointillist paintings comes about because your central vision sees dots; your peripheral vision sees boats and buildings. So as you move your eyes around,” said Livingstone, “you see the painting differently.”

She said artists are often trailblazers who have been ahead of neuroscientists in understanding “important things about how we see.”

Livingstone and photographer Sharon Harper, professor of visual art in Harvard’s Department of Visual and Environmental Studies, took part in a Wednesday lecture at the Harvard Art Museums titled “How Does Light Influence Our Creation and Perception of Images?” The talk was one of more than 80 events that are part of HUBweek, seven days of workshops, discussions, demonstrations, and competitions dedicated to exploring creativity in Greater Boston happening at the intersections of art, science, and technology. HUBweek is a collaboration among Harvard University, Massachusetts Institute of Technology, The Boston Globe, and Massachusetts General Hospital.

A photographer with an eye for the otherworldly, Harper said her own art-making involves the process of “responding to an environment or a situation to figure out how to access ideas I cannot reach, record, or understand without a camera.”

For the past 20 years she has been committed to taking photos that “in some way” surprise her, Harper said, such as a series of shots of lightning that taken together act like a strobe, animating several still shots of trees in a night sky, or ethereal images of the moon and the sun captured by a digital camera attached to a telescope.

Harper said she also likes to take pictures that “shake up our understanding of well-known places.” She transformed the iconic red rock image of the Grand Canyon by snapping pictures of the famous ravine at dawn for an hour with the sun pointing directly into her camera. The work, she said, explored “this idea of light continually changing in a scene.”

Her resultant pictures shift from a lemon-yellow to copper “to this very gray monochromatic image at the end.” Harper’s parting thought to the crowd was the notion that “light is entirely capable of changing our perception and constantly does so.”

Asked during a question-and-answer session to weigh in on why we find art “so pleasing,” Livingstone responded by saying: “Aesthetics, I don’t touch it. I don’t think neuroscientists have any business talking about beauty or aesthetics; we barely understand why rats like sugar.”

For her part, Harper said that art has the power to shake us from our everyday routines.