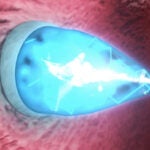 The great whales are carnivores, feeding on tiny, shrimp-like animals such as krill. Moreover, the microbes that live in whales’ guts — the microbiome — resemble those of other meat-eaters.

But scientists now have evidence that the whale microbiome shares traits with that of creatures not known to eat meat: cows.

Scientists led by Peter Girguis, professor of organismic and evolutionary biology at Harvard, have found that the gut microbiome of right whales and other baleen species shares characteristics with those of both cows and meat-eating predators. The dual microbial communities allow whales to extract the most nutrition possible from their diet, digesting not only the copepods they eat, but their chitin-rich shells as well. The study is described in a Sept. 22 paper in Nature Communications.

Among the co-authors of the paper are James McCarthy, professor of biological oceanography and Alexander Agassiz Professor of Biological Oceanography in the Museum of Comparative Zoology; Annabel Beichman ’14, now a graduate student at the University of California, Los Angeles; Joe Roman from the University of Vermont; Jarrod Scott and David Emerson, both from the Bigelow Laboratory for Ocean Sciences in Maine; and Jon Sanders, a former graduate student in Girguis’ lab.

“From one point of view, whales look like carnivores,” Girguis said. “They have the same kind of microbes that we find in lions and tigers that have very meat-rich diets. But they also have abundant communities of anaerobic bacteria, similar to those that [animals] use to break down cellulose.

“However, there’s not a lot of cellulose in the ocean, but there is a lot of chitin, which is in the exoskeletons of copepods that baleen whales eat,” Girguis continued. “What our paper suggests is the whale foregut is much like a cow’s gut, and we posit that chitin-degrading anaerobic microbial community thrives in there, breaking down that material and making it available to the whale.”

Those exoskeletons, Girguis said, represent as much as 10 percent of the whale’s total food intake, and would otherwise simply be defecated. By allowing whales to access the nutrition in the chitin-rich material, whales are able to extract the greatest possible benefit from their diet.

“It’s almost like a pre-adaptation,” he said “that may give them a differential advantage in harnessing energy from their food. The morphology of their gut comes from their ancestors, the very same ancestors to cows, camels, and others. It serves them well as carnivores because it allows them to maximally extract nutrition from their food.”

Ultimately, Girguis said, the study addresses questions that reach beyond the guts of whales.

“This is really a question of what we can call phylogenetic inertia,” he said. “Because what we’re really thinking about is: When you look at the microbiome of an organism, you can, to some degree, look back in time and see its ancestors, because organisms that are related to one another seem to have similar microbiomes.

“But not all organisms that are related live in the same kind of environment,” he continued. “So the question is, how different does your environment need to be before it changes your microbiome? This is a fundamental question about the relationship between your ancestry versus your current environment.”

Many such questions might not have been asked, Girguis said, were it not for then-undergraduate Beichman. The second author of the study, Beichman kick-started the study when she and Roman took on the unenviable task of following pods of right whales at sea and collecting samples of their feces to determine which microbes were present.

“There’s no other way to get the fecal samples but to collect them from the ocean,” Roman said.

“It was a thrill to set out each morning into uncertain weather to search for elusive right whales, then to extract and sequence DNA from our smelly trophies,” Beichman said. “It had always been my passion to use the latest advances in genetic sequencing technology to answer questions about species of conservation concern, and so I wanted to add a genetic component to the study.

“Working with my advisers to conceive the research questions based on the scientific literature, collect fecal samples in the field, and carry out DNA sequencing and analysis gave me invaluable experience at every stage of the study,” she added. “We all had different theories as to what the whale gut community might look like. What none of us expected was to see so much divergence from terrestrial mammals, or these shared characteristics with both terrestrial carnivores’ and herbivores’ microbiomes.”

“Given what we know about whales’ ancestry — that they’re related to ruminants [animals that get nutrients from plants by fermenting them in an early stage stomach], and that they still have a multi-chambered foregut — there were several things we might find,” Girguis said. “One hypothesis was that their microbiome would look like those of other meat-eaters like lions and tigers, and the foregut was just vestigial. The other hypothesis was that it allowed a different group of microbes to do something we hadn’t thought about. What we found was that whales have a microbiome that looks halfway like a ruminant and halfway like a carnivore.”

“We’ve come to better understand the evolution of whales over the past few decades, and see where they fit on the evolutionary tree. But we have not understood the microbial changes that have allowed them to become one of the most successful groups of animals in the ocean,” said Roman. “This study helps explain that.”

Going forward, Girguis and colleagues hope to sample the microbial community in whales’ stomach chambers, and to extend the study to toothed whales, which don’t have such chitin-rich diets. The team also has drawn interest from aquariums, which may be able to use information about the gut microbes in whales to better care for animals kept in captivity.

“A lot of aquariums … they know when their whales are healthy or not, but they don’t always have a causal factor, and these gut microbes may be a big clue,” Girguis said. “As long as people keep whales in captivity, there is value in this type of research, because it can keep them as healthy as possible.”

While the study may not provide a definitive answer to questions of phylogenetic inertia, it does suggest that some morphological features, if they can provide an advantage, are retained, despite dramatic changes in a creature’s environment.

“We now have this snapshot that addresses this question of how a creature’s evolutionary past interacts with its microbiome, and how its diet today influences its microbiome,” he said. “The answer is … if that morphological feature, if it has value to a species, then it may well be something that’s capitalized on over evolutionary time.”