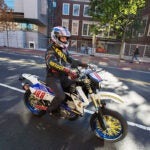 A passion for motocross

Harvard Professor Evelyn Brooks Higginbotham, Victor S. Thomas Professor of History and of African and African American Studies, is among the 10 recipients of the 2014 National Humanities Medal.

The White House announced the distinguished recipients of the award on Friday. The awardees include historians, writers, a philosopher, scholar, preservationist, food activist, and an education course. President Barack Obama will confer the medal in a Sept. 10 ceremony in the East Room.

Each year NEH invites nominations from individuals and organizations across the country. The National Council on the Humanities, NEH’s presidentially appointed and Senate-confirmed advisory body, reviews the nominations and provides recommendations to the president, who selects the recipients.

The NEH is celebrating its 50th anniversary beginning Sept 29.

“The National Endowment for the Humanities is proud to join President Obama in celebrating the achievements of these distinguished medalists,” said NEH Chairman William Adams. “The recipients of this medal have sparked our imaginations, ignited our passions, and transformed our cultural understanding. They embody how the humanities can serve a common good.”

* For the past 15 years Tim McCarthy, adjunct lecturer in public policy at the Harvard Kennedy School, has been heavily involved in  The Clemente Course in the Humanities, which is among the recipients of the National Humanities Medal being awarded on Thursday.