Life behind the pose 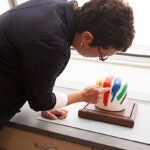 “We are not what we seem.” When the iconic novelist Richard Wright wrote those words, in 1940, he was describing the African-American experience. As a stunning new exhibit at the Ethelbert Cooper Gallery shows, the complexity of seeing and identity took its own twists on the other side of the Atlantic when the relatively new art of photography began producing images of people of color in Victorian England. In more than 100 photographs, including a striking set that has been lost for more than 120 years, “Black Chronicles II” reveals a mash-up of racist imagery and cultural tropes that in many ways will be familiar to American viewers — and still often reveals the timeless humanity of the subjects.

Current issues of cultural identity and self-determination are at the fore of the exhibit, says gallery executive director Vera Grant, although the works themselves were largely made from 1862 to 1899. Curated by Renée Mussai and Mark Sealy of the London-based arts agency Autograph ABP, “Black Chronicles II” was produced through original research in private collections in the United Kingdom in collaboration with the Hulton Archive, London, a division of Getty Images. Part of a larger ongoing project called “The Missing Chapter,” it is the second in a series of exhibitions dedicated to excavating archives that began in 2011 with a small showcase done in collaboration with Magnum Photos in London.

Despite the anonymity of many of its subjects (research is ongoing), “Black Chronicles II” reveals the complicated nature of life for people of color in Victorian England. Ndugu M’Hali, for example, came to the public’s attention as Kalulu, the boy servant of the explorer Sir Henry Morton Stanley. In this show, he is depicted several times, in both African and Western dress, a child between cultures.

A more formal series of small portraits — largely cartes de visites, or calling cards — opens the exhibit. These include images of Sarah Forbes Bonetta, a native of West Africa who was “given” to Queen Victoria as a slave and raised as her goddaughter. In two portraits from 1862, one with her husband, she appears the essence of a calm, well-dressed Victorian lady, despite her tragic history.

The photos fall roughly into three categories, with the sitters usually entertainers (including athletes, like the boxer Peter “The Black Prince” Jackson), missionaries, or dignitaries. Made before the emergence of casual photography, these are all formal portraits, shot in a studio, often in front of painted backdrops. The subjects, particularly the entertainers, are frequently posed in “African” costume, with furs and spears. At times, as with M’Hali and Stanley, the people of color are themselves used as props. The sitters also include people of apparently South Asian ancestry, such as Duleep Singh, “black” being a catch-all for people from Great Britain’s colonial territories.

“The term is used with a political purpose and intentionally broadens the social category of ‘black’ in Great Britain,” said Grant.

Despite the staging and the often heavy-handed props (M’Hali, for example, appears more comfortable in his European suit than holding a spear), the portraits can transcend stereotypes. In one enlarged print, an unidentified sitter (“Zulu Boy”) is posed sighting a rifle. Although he is both a child and a person of color, his competence and comfort with the weapon is apparent — the opposite of the inept, comic pose that would have been more usual for the time.

Such dignity is apparent in the highlight of the exhibit: rediscovered photos of the African Choir, which toured Britain from 1891 to 1893 to raise funds for a Christian school in South Africa. These images, made from plates unearthed in May in the Hulton Archives/London Stereoscopic Company, were last shown in the Illustrated London News in 1891. Enlarged beyond life-size, they include a series of intimate portraits, the glass plates and two-camera stereoscopic technique rendering a level of detail and clarity that tempts the viewer to touch the warmth of skin, the texture of a fur robe. But more intriguing than the aesthetics of the pictures are the personalities they capture. Although many of the choir members are unidentified, they present themselves as distinct individuals, their dignity and sense of self only highlighted by the costuming they wear.

“Black Chronicles II” is on view at the Hutchins Center’s Cooper Gallery through Dec. 11.