Harvard IT gets a reboot 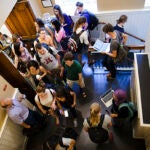 Finding the classes that fit

Last year, Bennett Parsons took a just-the-facts approach to Harvard’s aging my.harvard student information system: He did what he had to do and got out.

“As a freshman, I was fairly confused about all the different things that the old system had,” Parsons said. “Basically, whenever I had to perform a task that was in the system, I’d have to refer to the latest email that would walk you through a few steps. I’d just log in and do that one thing and then log out because I had no idea what was going on.”

It’s different this fall, Parsons said, because the new my.harvard system and Web portal — which replaces and combines the functions of about 40 older systems and paper-based processes — went live on Aug. 17 after two years of development. The new system streamlines and digitizes much of the registration and enrollment process, as well as management of student information for faculty, staff, and advisers. College students can now browse and add courses to an electronic study card, access their advising network, and complete the enrollment-approval process with faculty and advisers, all in one place. While these changes are mostly logistical, the new system makes it easier and quicker for students, faculty, advisers, and staff to complete simple tasks.

The old systems “were difficult, and it wasn’t all right there in front of you. I probably could have figured it out, but at the time I had other things to worry about,” Parsons said. “The good thing about the new system is that it is really very simple. Aesthetically, it’s really clear.”

The ease of using the new student-information system is due in part to the focused effort and testing by students like Parsons, who interned at the Student Information System Office this summer. Faculty of Arts and Sciences Registrar Michael Burke said that hundreds of people — including many students, faculty, and advisers — collaborated on the project throughout the two-year planning and development process to create a system to fit Harvard’s needs.

“We’ve brought it all under one portal,” Burke said of the older systems my.harvard replaced. “I’m pretty thrilled, honestly.”

Burke said new functionality will continue to be added through the semester, as different phases of the academic year unfold, including shopping period, course registration, declaring concentrations, and student advising.

More changes on the way

My.harvard is just part of a significant revamp of the University’s academic and administrative IT systems launching this fall, starting in the Faculty of Arts and Sciences. The University also has replaced its course website platforms with Canvas, an open-source learning-management system. In November, HarvardKey will come online, allowing Harvard community members to access email, applications, and resources across the University with a single login name and password, instead of the multiple login combinations required today.

Jim Waldo, Gordon McKay Professor of the Practice of Computer Science and Harvard’s chief technology officer, echoed Parsons’ enthusiasm when talking about Canvas. Waldo, who has been using the platform for several years, said it streamlines the administrative side of running a class, allowing more focus on actual teaching.

Waldo said Canvas is much more than an application that builds course websites. He said it is a learning-management system that, among other things, allows faculty members to upload course materials, post videos, set up quizzes and course modules, record attendance, grade assignments, set up course calendars, and even conduct online chats and forums. Functions are interlinked so that, for example, a change made to the syllabus automatically shows up on the calendar.

“It is a course-site platform and a lot more,” Waldo said. “Once you get used to it, you’re not going to go back.”

Waldo said he’s taken advantage of new Canvas functionality each year he’s used it, and every time he wonders why he didn’t do it sooner.

Harvard Vice President and Chief Information Officer Anne Margulies said the new systems are part of a dramatic, University-wide technology renewal whose aim is to enhance security even as it allows students and faculty to spend less time on administrative tasks and more on their core goal at Harvard: teaching and learning.

“Those three — Canvas, my.harvard, and HarvardKey — all together will have a dramatic impact on the entire community in a positive way,” Margulies said. “They’re going to ultimately make it easier for faculty and students to manage their academic life here and make it more secure.”

The older systems being replaced often were written specifically for Harvard, and had limited interoperability, Margulies said. The new systems were created through the efforts of thousands of people, from registrars to IT staffers to faculty members and students. The technology renewal, an initiative by Harvard’s council of chief information officers, also will be more secure, an important factor as hackers become increasingly sophisticated and aggressive.

“All three of those major systems are seriously old. Each system is made up of multiple patchwork systems. We’ve been on borrowed time,” Margulies said. “The most dramatic is the old my.harvard … We’ve gotten our money’s worth.”

In addition to bringing efficiency to day-to-day operations, each of the new technologies will provide significantly better information-security protection, which is critical, Margulies said, because of the increasing volume of attacks against Harvard’s websites and computer systems. Higher education, she said, has become the field most frequently targeted by hackers. With Harvard’s name so prominent in higher education, Margulies said it’s not a stretch to think that the University is among the most targeted places in the most targeted industry. Harvard takes seriously its obligation to guard the personal data of students, faculty, and staff, she said.

Bumps in the road

Though the new systems have been designed for ease of use, some adjustment is inevitable. Margulies acknowledged that there will be a learning curve as users get used to the new applications, and as developers continue to work out bugs in the service. She said there are several ways for the Harvard community to get help and report problems — from expanded IT help desk coverage, to mobile IT support teams stationed around campus, to personal help from local experts.