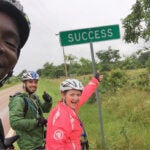 A team of scientists at the Wyss Institute last year described the development of a device to treat sepsis that works by mimicking the human spleen. The device cleanses pathogens and toxins from blood flowing through a dialysis-like circuit. Now the team has developed an improved device that works with conventional antibiotic therapies and is better positioned for near-term use in clinics.

The improved design is described in the October issue of Biomaterials.

Sepsis is a common and frequently fatal medical complication that can occur when the body attempts to fight off serious infection and the resulting widespread inflammation can cause organs to shut down, blood pressure to drop, and the heart to weaken. This can lead to septic shock, which eventually kills more than 30 percent of septic patients in the United States. In most cases, the pathogen responsible for triggering the septic condition is not pinpointed, so clinicians blindly prescribe an antibiotic course in a blanket attempt to stave off the infectious bacteria and halt the dangerous inflammatory response.

This video explains how sepsis induced by an overload of blood pathogens can be treated with the Wyss Institute’s improved pathogen-extracting, spleen-mimicking device. Blood is flown through a cartridge filled with hollow fibers that are coated with a genetically engineered blood protein inspired by a naturally occurring human molecule called Mannose-binding lectin (MBL). MBL is found in our innate immune system and binds to toxic invaders, marking them for capture by immune cells in the spleen. Courtesy of the Wyss Institute

But sepsis can be caused by a wide-ranging variety of pathogens that are not susceptible to antibiotics, including viruses, fungi, and parasites. What’s more, even when antibiotics successfully kill the invading bacteria, dead pathogens fragment and release toxins into the patient’s bloodstream.

“The inflammatory cascade that leads to sepsis is triggered by pathogens, and specifically by the toxins they release,” said Wyss Institute founding director Donald Ingber, who leads the Wyss team developing the device. Ingber is the Judah Folkman Professor of Vascular Biology at Boston Children’s Hospital and Harvard Medical School and a professor of bioengineering at the Harvard John A. Paulson School of Engineering and Applied Science. “Thus, the most effective strategy is to treat with the best antibiotics you can muster, while also removing the toxins and remaining pathogens from the patient’s blood as quickly as possible.”

The Wyss team’s blood-cleansing approach can be administered quickly, even without identifying the infectious agent. This is because it uses the Wyss Institute’s proprietary, pathogen-capturing agent, FcMBL, which binds all types of live and dead infectious microbes, including bacteria, fungi, viruses, and the toxins they release. FcMBL is a genetically engineered blood protein inspired by a naturally occurring human molecule called mannose-binding lectin (MBL), which is found in the innate immune system and binds to toxic invaders, marking them for capture by immune cells in the spleen.

Originally, the device was conceived to operate similarly to a dialysis machine: Infected blood in an animal — and potentially one day in a patient — is flowed from one vein through catheters to the device. There, FcMBL-coated magnetic beads are added to the blood, and then bead-bound pathogens are extracted by magnets inside the device before the cleansed blood is returned to the body through another vein.

The improved device removes the complexity, regulatory challenges, and cost associated with the magnetic beads and microfluidic architecture of its predecessor, but retains the FcMBL protein’s ability to bind to all kinds of live or dead pathogens and toxins. The optimized system uses hollow fiber filters found in dialysis cartridges already approved by the FDA whose inner walls are coated with the FcMBL protein. In animal studies, treatment with this new pathogen-extracting device reduced the number of E. coli, Staphylococcus aureus, and endotoxins circulating in the bloodstream by more than 99 percent.

“Using the device, alone or alongside antibiotics, we can quickly bring blood back to normal conditions, curtailing an inflammatory response rather than exacerbating it,” said the paper’s first author, Tohid Fatanat Didar, a postdoctoral fellow at the Wyss institute and a research fellow at Boston Children’s Hospital. “If all goes well, physicians will someday be able to use the device in tandem with standard antibiotic treatments to deliver a one-two punch to pathogens, synergistically killing and cleansing all live and dead invaders from the bloodstream.”

With the improved blood-cleansing therapeutic device proving extremely effective in small-animal studies, the Wyss team is planning to move to large-animal studies as the next step to demonstrating the proof of concept that is required before it can advance to human clinical trials.

“Seeing our system work in animal models gives us confidence that this could work in humans, because we are successfully treating animals infected with human pathogens,” said Wyss senior staff scientist Michael Super, who works on the Institute’s Advanced Technology Team and is also an author on the new study.

“Since the development of earlier prototypes of the device, we’ve applied the Wyss model of de-risking the technology to prime it for commercialization,” said Ingber. “Our goal is to see this move out of the lab and into hospitals as well as onto the battlefield, where it can save lives, within years rather than decades.”

This work was supported by the Defense Advanced Research Projects Agency and the Wyss Institute for Biologically Inspired Engineering at Harvard University.