Murray nominated to senior role at Department of Energy 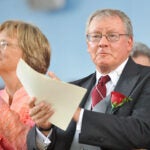 President Obama has nominated former Harvard School of Engineering and Applied Sciences Dean Cherry A. Murray to be director of the Office of Science in the U.S. Department of Energy, a key administration post.

The announcement was made at the White House on Wednesday. The nomination must be confirmed by the U.S. Senate.

Murray, who concluded her five-year tenure as dean at the end of 2014, is currently the Benjamin Peirce Professor of Technology and Public Policy at the Harvard John A. Paulson School of Engineering and Applied Sciences (SEAS) and professor of physics. She came to Harvard in 2009, after a distinguished career as an experimental scientist and administrator in two of America’s leading basic and applied research organizations, Lawrence Livermore National Laboratory and Bell Laboratories.

The Department of Energy’s Office of Science is the largest federal sponsor of basic research in the physical sciences, supporting more than 25,000 Ph.D.’s, graduate students, undergraduates, engineers, and technicians at more than 300 U.S. academic institutions and across all of the DOE national laboratories. The Office of Science is the steward of 10 of the DOE national labs and has an annual budget of approximately $5 billion. The mission of the office is to deliver scientific discoveries and tools that transform our understanding of nature and advance the energy, economic, and national security interests of the United States.

Murray has significant federal energy and science policy experience in addition to her service as principal associate director for science and technology at Lawrence Livermore National Laboratory, a DOE-managed national lab. She served as chair of the National Academy of Sciences’ National Research Council Division of Engineering and Physical Science from 2008 to 2013. She has served as a member of the U.S. Secretary of Energy Advisory Board since 2013, was appointed in 2014 as commissioner on the Commission to Review the Effectiveness of the National Energy Laboratories, and was a member of the National Commission on the BP Deepwater Horizon Oil Spill and Offshore Drilling.