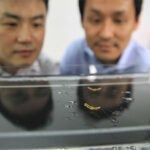 They straggled into the rainy Virginia campground on their bikes, wet and exhausted, then struggled to pitch their tents and figure out how to fire up the stove so they could eat.

“The first day we did 22 miles. It was the longest 22 miles we could ever experience,” said Tola Omilana, a biomedical engineering concentrator at Harvard entering his senior year.

Thursday, Omilana and five other students — three from Harvard and two from the Massachusetts Institute of Technology — coasted over San Francisco’s Golden Gate Bridge, marking the end of a cross-country bike trip that tested them physically and mentally even as it offered students in a dozen towns a peek into STEM education, as in science, technology, engineering, and math.

The students biked and stopped in smaller cities, such as Hazard, Ky., Newton, Kan., and Carson City, Nev., as well as a couple of larger ones, such as Salt Lake City and Kansas City. The students offered six-hour workshops, which they called “learning festivals,” on robotics, rocketry, and computer science to 400 schoolchildren along the way.

“Not everybody gets a chance to do something that will stay with you for the rest of your life,” said Brian Wagner, a Harvard sophomore interested in physics and economics. “But … it also combines our ability to … really promote science and share our love of that with kids from all over the country. [During] the learning festivals we’ve held, we’ve made great connections with the kids, and that’s also why we do it.”

The students are part of a group called “Spokes,” which got its start two years ago at MIT and which aims to offer, in collaboration with the education platforms edX and Teach for America, a summer adventure that allows students to do some good as they go.

Francesca Childs, a Harvard junior studying astrophysics and physics, said the trip came together late in the spring, leaving participants scrambling to organize the journey even as they juggled classwork and other commitments. Their plan on returning to campus is to create a Harvard Spokes club, which, as a student activity, might qualify it for some University support and, from an organizational standpoint, make it easier for students to do something similar next summer.

Life on the road got easier after that first soggy day but never really got easy, according to Simon Shuham, a junior studying mechanical engineering and computer science. Though biking across the country sounds like a tough physical challenge going in, you’re not really prepared for just how tough it is, Shuham said. The physical toll took down one member of the team. Harvard junior Shadi Fadaee developed a knee injury that, after a month’s perseverance, she ultimately couldn’t shake. For the rest of the team, Shuham said the trick was to break the trip down — just focus on today’s miles today and tomorrow’s miles tomorrow — which made the long effort “surprisingly doable.”

In a different way, the off days for teaching were challenging as well, Shuham said, between preparing the lessons and equipment, shifting gears mentally, and then instructing for six hours.

Members of the group took turns driving a support van that contained laptops and equipment for the learning festivals, and offered logistical support for the ride. Crossing Nevada, for example, meant rides of 70 to 90 miles between towns, so the van had to carry water for the riders and find places for them to stop, eat and rest.

“I’ve always been into traveling, hiking. There’s no better way to see the country,” Shuham said. “You see parts of the country — the deserts of Nevada — that most people don’t get to see. Hopefully we’ll make a difference and can feel we did something important with our summer.”

As the riders’ physical conditioning improved, so did their daily mileage. That first day’s 22 miles may have been the shortest leg, Omilana said, and they eventually were regularly logging 60 to 90 miles. On Tuesday, the long downhill from the Sierra Nevadas brought them 95 miles to Lodi, Calif., and a drop of 9,000 feet in altitude.

When asked to sum up the trip, Omilana hesitated, saying that each day was so full of emotions and sensations — physical exhaustion, the growing bonds of the team, awe at the kindness of strangers — that it was difficult to put the experience succinctly in words.

“You get to know people on an intimate level,” Omilana said. “It’s been very cool to see the team learn to work together. Making it to the destination is weird. People have mixed feelings.”

As they reached the Golden Gate Bridge Thursday and celebrated, smiling and holding a homemade banner that said, “Finish Line!!! Spokes 2015,” Childs said that, after all the miles, it seemed impossible that they had finally made it.