How racial issues can be fairly framed 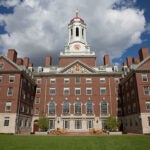 When she first heard that a Virginia television reporter and cameraman had been murdered while they were on the job, “My immediate thought was, ‘Please God, don’t let it be a person of color,’” said Callie Crossley, a WGBH-TV and radio host and former Nieman Fellow. “And, of course, it was. Now we have a different dynamic. The shooter has underscored the threat perspective that one has about black men.”

So began a lively and very frank panel discussion on “Race and the Media” before 130 people at a packed Barker Center on Thursday. The Faculty of Arts and Sciences (FAS) organized the discussion, which focused on the media’s portrayal of recent racial issues and how it can frame perspective and opinions about race.

Picking up on Crossley’s comments, panelist Michael Jeffries, an associate professor of American Studies at Wellesley College, said, “One of the uglier aspects of this event is that the shooter filmed it and posted it on Facebook and other social media, allowing people to see it over and over again.

“There was great concern and regret and sanctity for the welfare of the victims’ families and how wrong it was to view that kind of imagery” ― in contrast, he said, to the concern evoked by images of Eric Garner being choked by a New York police officer, though the circumstances there were different.

“There is no such thing as telling the whole story,” said panelist Carole Bell, assistant professor of communications studies at Northeastern University. She said journalists must “frame” or select certain aspects of a story “to help us interpret it by selecting certain facts.”

Rupa Shenoy, a WGBH reporter, said it is hard to get editors in a newsroom to agree to allow reporters to cover stories regarding minorities in the way that reporters of color want to cover them. She said that some editors resisted her using the phrase “black lives matter” when reporting on that movement, and when she questioned it, told her that “all lives matter.” 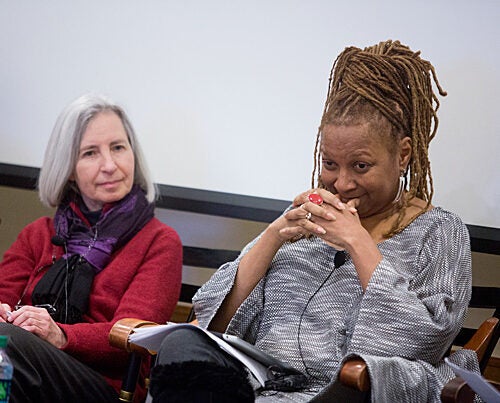 After Ferguson, the ripples across Harvard

“I get so frustrated,” she said. “It’s a continual fight.”

Bell said she believes that the only reason “black lives matter” was eventually picked up by the mainstream media was because of reports or feeds on social media.

A reporter’s predisposition can get in the way of presenting fair and accurate portrayals of people of color, said Bell, adding that it is much more common for media to reinforce existing values than to reshape them.

“They are reproducing the culture in which they were raised. We are wedded to what we think we know,” she concluded.

Crossley asked how that can be changed.

“One major intervention is the use of social media to collect and spread the news,” Jeffries responded. “They not only report the facts on the ground, but tell you how to get there, what’s coming next.” However, he warned that some social media outlets are starting to clamp down on the kind of imagery and information that shows up on the feeds.

All the panelists challenged the audience to contact news outlets when they disagree with stories or know that a report was wrong. “Be skeptical about the agendas of editors and owners of news outlets,” Jeffries said.

“Folk can’t be silent,” Crossley said. “Speak up, write up, say something. Let them know what you saw is wrong.”

“Be educated consumers,” Bell urged. “We have a tendency to choose sources that are consistent with our existing beliefs. It’s important to have a broader perspective. You learn so much more when reading about one issue in multiple sources with different perspectives.”

“The insights they shared about the career challenges for minorities in the journalism profession, as well as some the inherent biases in the industry, really caused me to think and reflect on the news outlets I use on a daily basis,” said Mary Ann Bradley, associate dean for administrative operations at FAS. “From how a story is framed, to the words and pictures used to tell the story, as well as news outlet ownership/affiliation … we all need to become wary, if not better-educated, consumers.”

From the audience, Emelyn dela Pena, Harvard College assistant dean of student life for equity, diversity, and inclusion, noted, “The most eye-opening part of the program was realizing the power of framing when it comes to how similar events are reported by the media, particularly when filtered through the lens of the reporter’s lived experiences.”

“Race and the Media” was sponsored by the FAS Dean’s Office, FAS Human Resources, and the FAS Office of Diversity Relations and Communications.