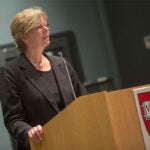 Murray nominated to senior role at Department of Energy

A member of the Harvard Business School (HBS) faculty from 1991 until his retirement in 2000, he studied the leadership of organizations undergoing significant change, entrepreneurship, and more recently, career and personal renewal at midlife. He taught the courses “Leadership and Organizational Behavior (LEAD),” “General Management,” and “Human Resources Management” in the M.B.A. program and a wide range of offerings in executive education, including “CEO Transition Workshop,” “Leading Professional Service Firms,” “Age of Options,” and “Strategic Human Resources Management.”

“He was a wonderful colleague, generous with his time and his friendship, and engaged in a number of activities at the School and at Harvard University, including the Harvard Committee on University Resources, the Beth Israel Deaconess Medical Center, and the Harvard-Radcliffe Hillel Foundation,” said HBS Dean Nitin Nohria.

Before joining the HBS faculty, Sloane spent 30 years in management consulting. He was a co-founder of the firm Temple, Barker & Sloane, Inc., and went on to serve as chairman and chief executive of its successor, Mercer Management Consulting. An adviser to industrial and commercial corporations in the United States, Canada, Europe, and Asia, he focused his consulting activities in the areas of corporate strategic development and organizational effectiveness. He also served as an adviser to the White House, other arms of government, and industry groups on issues involving business-government relations and policy formation.

In addition to teaching and consulting, Sloane served as a director of many companies, including the American President Companies, Ltd.; Brinks Home Security; Ionics, Inc.; Leaseway Transportation Corp.; Moore McCormack Resources, Inc.; and Sapient Corp. He was also a member of the advisory boards of the Belfer Center for Science and International Affairs at the Harvard Kennedy School and Northwestern University’s Transportation Center.

With a deep and broad interest in and commitment to community affairs and philanthropic causes, Sloane was actively involved with the Combined Jewish Philanthropies of Greater Boston, the Jewish Federation–North Shore, and the Jewish Community Center in Marblehead, among other organizations.

“Carl had an insightful mind and a generous spirit,” said his friend and colleague Stephen A. Greyser, Richard P. Chapman Professor of Business Administration Emeritus. “His exceptional people skills and willingness to help others, along with a generous dose of charisma, left a lasting impression on everyone he met throughout his life.”

In 2000, the board of directors of the Association of Management Consulting Firms established the Carl S. Sloane Award in his honor to recognize “an individual who has contributed substantially to the development of the consulting profession, either through leadership, the development of intellectual capital, innovation in consulting processes, value added to clients served, or a combination of the above.”

With his wife of 56 years, Toby (Tattlebaum), he was a resident of Marblehead, Mass., and then Swampscott, Mass. They had a retirement home in Highland Beach, Fla.

In addition to his wife, Sloane is survived by their children, Lisa, Amy, and Todd; five grandchildren; and his brothers, Richard and Stephen.

In lieu of flowers, expressions of sympathy may be made to Beth Israel Deaconess Medical Center, c/o Chris Laping, 330 Brookline Ave., Boston, MA 02215.