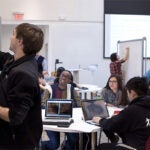 In the first 10 minutes of watching Javion Rookard in action, the 19-year-old director of the Cambridge Youth Enrichment Program (CYEP) took two phone calls, answered a text, helped soothe an upset child in need of a Band-Aid, finished cleaning the cafeteria after lunch, and directed a group where it needed to go. And he did it all with a smile.

“I’ve always wanted to be director … Being director really means you can do anything. It means you have to do anything,” Rookard said. “I’m the lunch guy, the teacher, the trainer, the manager, the fundraiser. It teaches you to wear so many hats and be able to juggle multiple things at once … This job is never over. I don’t go home at 5 p.m. My phone never stops buzzing. It’s crazy, but I absolutely love it.”

With more than 160 children at three sites across Cambridge, the enrichment program is the oldest and largest of Harvard’s Phillips Brooks House Association’s (PBHA) 10 student-run camps.

The SUP programs provide a safe, supportive, positive environment for children through the summer. The programs teach violence prevention, and work to stop summertime loss of educational concepts. Research consistently shows that students, particularly those from low-income families, risk losing at least two months of literacy and math skills during the summer. The SUP camps work on that through activities that combine academics with social and emotional development.

Art of crafting a popular program

As Rookard checked in on classes making props for the upcoming end-of-the-season musical and began getting ready to lead a group of fifth graders in rehearsal, he also made time to recognize dozens of students by name. That particular skill was aided by his being part of the program for years.

“This is my 13th year as part of CYEP,” said Rookard, who will be a sophomore at Bentley University this fall. “I started coming here when I was 6 years old. But my older siblings also came here. My oldest brother is six years older than me, and he also started when he was 6, so assuming I was with my mom when she dropped him off, I guess you can say that I’ve truly been coming here my entire life.”

The campers seem to love him.

“I think Javion is great. He’s so funny. He should be the director for at least two more years,” said Adrianna Brown, 10, of Cambridge. “We get to do so many fun things here,” she said. “We just went camping in New Hampshire, and they had a zip line! I also really like doing the science experiments and learning all about evaporation.”

“My favorite part was going roller skating and getting to sleep on the rink. We watched movies all night and had pizza for dinner,” said Fabienne Douyon, 10 “and a half,” of Cambridge, who’s been coming to CYEP for “a lonnnnng time.”

Brown and Douyon are just two of hundreds of kids Rookard oversees. He is, of course, aided by a host of college-aged counselors.

“This is my first year at CYEP,” said Sarah Gonzalez ’18, of El Paso, Texas. “Harvard can sometimes be a bubble, and during my first year I know that I didn’t get out as much as I should have. I wanted to work here to build a better relationship with Cambridge and our surrounding community. Getting to know this community, the kids, and their families has been an invaluable experience.”

“I do this because of the relationships that I build with the kids. That is my favorite part. Deep down, this is my heart,” said Rookard.” When they look at you as not just their mentor, but as their friend, that means the world to me. When they look at up smiling, well, that means we’re doing something right.”