First, you move in 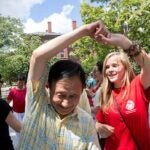 Freshmen arrive on campus, start settling in to college, and new lives

“My mother would’ve given me serious Jewish guilt” if he’d left home early, he said.

Boris is also the first to leave the family’s home in Queens, N.Y. That’s why Lana packed him up with enough home cooking to last his first week, including fried dough stuffed with meat, pumpkin samosas, even tongue.

“They’re worried about me not eating,” Boris said, laughing, inside his Thayer Hall suite. “My dad was talking to me about eating breakfast, lunch, and dinner, and he launched into this story about how he got ulcers in the Army from not eating — and they lasted for 25 years.”

This is move-in day at Harvard for the Class of 2019, a bittersweet mix of parting from hometowns, parents — childhood — and the start of college life.

It’s also a lot of heavy lifting. In the dawn hours, parents, siblings, and new students loaded up cars with everything needed for a successful first year, like the sofa that Taylor Gavula’s mother rescued from a South Boston dumpster, which now proudly resides in Canaday Hall.

For her room at Thayer, Ngozi Musa brought the same bedding she has in her Seattle home. Rachel Clemens got a hand from upperclassman Lejla Skokic, a staffer with the Harvard Student Agencies, who helped transport Clemens’ boxes of linens, winter boots, and oboe.

Clemens was en route to talk with her new roommates about who gets the single rooms and who is stuck with a double. Weeks prior to move-in, Gavula and roommates gathered on Skype, rolled a die, and let fate decide.

Meanwhile, in the Yard, Danoff Dean of Harvard College Rakesh Khurana welcomed members of the Class of 2019, alongside Michael D. Smith, Edgerly Family Dean of the Faculty of Arts and Sciences. President Drew Faust, and Dean of Freshman Thomas Dingman greeted new students and parents on the way to Pennypacker Hall.

Californian Sophie Schick, her father, Robert, and her mother, Eun-Hee Chang, were surprised by Faust and Dingman as they strolled past Massachusetts Hall.

“It’s pretty surreal — she was so easy to talk to. I didn’t expect her to be like that,” Sophie said of Faust. “It’s very impressive how they’re going out of their way to talk to everyone.”

“It’s definitely quite the welcome,” said Reynolds. “I didn’t expect to meet those two.”

There will be bumps in the road, of course. For Davidov, the slanted ceiling in his room is a recipe for a good head bump, especially because the incoming freshman suffers from the occasional nightmare. “I see my grandma sometimes,” he said. “It’s kind of scary.”

Alex McPhee, who hails from the Bahamas, and Dustin Swonder of Richmond, Ind., were meeting for the first time inside their room at Thayer, where many details needed to be diplomatically hammered out.

The two will share a room, with a smaller common space, though Swonder wondered if the common space might also work as a bedroom. “What’re your sleeping habits?” he asked.

“I’m really easy,” said McPhee, who was interrupted by a ringing cell phone.

“Hold on, someone’s calling me,” said Swonder, looking at his phone. “It’s my mom.”