A summer of learning 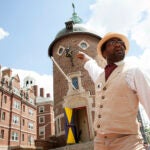 At academy, students stretch their minds through science

As visitors walked into the final student exhibition at the Cambridge-Harvard Summer Academy (CHSA), they were greeted by “Bob Jr. from Harvard,” who directed them to where they needed to go. Bob was decked out in full Harvard regalia. He was handsome. He was polite. And he was a robot, made by two local high school students participating in CHSA as part of their final project.

“This was a really great project because it was a little of everything,” said Uchenna Eke, 17, of Cambridge. “Obviously it was computer science because we built a robot and fed it commands. It was physics because we made him move using resistance and energy. It was engineering. It was art. It was many different types of science in one project.

“We really put our whole heart into this. At first we thought it would be impossible, but we worked together as a team and really made it happen,” continued Eke, who labored alongside Pedro Cintron, 15, of Hyde Park and Marly Burgos, 16, of Mattapan.

Eke and Cintron were just two of the hundreds of students presenting their final projects at the Cambridge Rindge and Latin School for the sixth annual CHSA Student Exhibition. CHSA is a partnership among the Harvard Graduate School of Education (HGSE), the Cambridge Public Schools, and the Cristo Rey Boston High School, a private Catholic school in Dorchester. The students participated in five weeks of summer enrichment provided by HGSE teaching teams that included a veteran mentor teacher and interns from the Teacher Education Program.

“CHSA is not your typical summer school. It is an intensive learning experience for both the high school students and for the teaching interns from the HGSE. The high school students have the opportunity to learn new things in a different setting and a different context than they may normally do in school, and our teaching interns really get the hands-on experience of learning on the job.  Any time we can give back to our neighbors, that’s a win-win for everyone,” said Beth Simpson, director of the CHSA.

This year’s projects ranged from the mathematics of social justice to polynomial roller coasters, from autobiographical demonstrations to identity development.

“For our project, we held a series of labs, and at each lab worked on a different art project. But this wasn’t an art class. It was a class to explore the science behind making art. At each lab we learned about a different scientific concept, such as the structure of an atom, or about different types of chemical bonds. At one lab we made tie-dye. At another we soaked paper in cabbage juice and examined how the cabbage’s acidity affected the paint,” said Jessilyn Reese, a teacher at Cambridge Rindge and Latin.

Edison Baez, 17, of Roslindale explained how they made paint. “We basically crushed up various compounds to make certain colors, just like they had to do in the olden days. In fact,” he said, “this is the prime way people made paint up until the 14th century, when oil paint was developed.”

Things weren’t quite so calm over in biology, where students were trying to help save the world and various animals in it from extinction.

“Our project was called the Catastrophe Project,” said biology teacher Maria Chal, a member of HGSE’s Class of 2016. “We took a look at genes and genetic engineering. We looked at strips of DNA, tried to decode them and determine certain characteristics. Then we had to figure out how we could genetically modify that DNA so that our animal could survive certain catastrophes.”

Amanuel Tedla, 16, of Cambridge was standing before his project, “Kangasaurus,” a frightening-looking dinosaur that in theory lived in the Amazon rainforest. Kangasaurus was carnivorous, but after a hypothetical catastrophe befell Earth, it was no longer be able to hunt. Tedla needed to figure out if he could genetically modify Kangasaurus so that it would be able to survive on plants, and he did so by taking out genes associated with eating meat and inserting specific genes from cows, allowing the dinosaur to become a certified vegetarian. “Then we had to look at the whole process, and decide if, overall, genetic modification was good or bad,” he said.

Others used math for pragmatic purposes.

“For my project, I decided to see what it would be like to convert my school gym into a weekend homeless shelter. For the plans, I used math to make it to scale,” said Jake Woisin, 16, of Cambridge. “We got to listen to an actual architect talk about how to lay out a building. It was all pretty interesting.”

“This exhibition is by far my favorite thing about being part of CHSA,” said Bailey White, a 2014 graduate of HGSE, who has taught geometry at the summer academy for the past two summers. “The students are just so proud of their projects. It brings everyone together. There’s real pride in what they’ve been able to accomplish this summer, and it’s really nice to see that.”