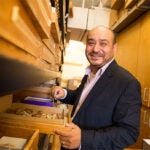 A shift in motherhood

Walking on water might sound supernatural, but in fact it is a quite natural phenomenon. Many small living creatures leverage the surface tension of water to move themselves around. One of the most complex maneuvers, jumping on water, is achieved by a species of semi-aquatic insects called water striders that not only skim along water’s surface but also generate enough upward thrust with their legs to launch themselves airborne from it.

Emulating this natural form of water-based locomotion, an international team of scientists from Seoul National University in South Korea (SNU), Harvard’s Wyss Institute for Biologically Inspired Engineering, and the Harvard John A. Paulson School of Engineering and Applied Sciences has unveiled a novel robotic insect that can jump off of water’s surface. In doing so, they have revealed new insights into the natural mechanics that allow water striders to jump from ground or water with the same amount of power and height. The work is reported in Friday’s issue of Science.

“Water’s surface needs to be pressed at the right speed for an adequate amount of time, up to a certain depth, in order to achieve jumping,” said the study’s co-senior author, Kyu-Jin Cho, an associate professor in the Department of Mechanical and Aerospace Engineering and director of the Biorobotics Laboratory at SNU. “The water strider is capable of doing all these things flawlessly.”

The water strider, whose legs have slightly curved tips, employs a rotational leg movement to aid it its takeoff from the water’s surface, discovered co-senior author Ho-Young Kim, a professor in SNU’s Department of Mechanical and Aerospace Engineering and director of its Micro Fluid Mechanics Lab. Kim, a former Wyss Institute Visiting Scholar, worked with the study’s co-first author, Eunjin Yang, a graduate researcher at SNU’s Micro Fluid Mechanics Lab, to collect water striders and take extensive videos of their movements to analyze the mechanics that enable the insects to skim on and jump off water’s surface.

It took the team several tries to fully understand the mechanics of the water strider, using robotic prototypes to test and shape their hypotheses.

“If you apply as much force as quickly as possible on water, the limbs will break through the surface and you won’t get anywhere,” said Robert Wood, a co-author on the study, a Wyss Institute Core Faculty member, the Charles River Professor of Engineering and Applied Sciences at the Harvard Paulson School, and founder of the Harvard Microrobotics Lab.

By comparing water striders to prototypes of their robotic insect, the SNU and Harvard team discovered that the best way to jump off water is to maintain leg contact with it for as long as possible during the jump itself.

In this video, watch how novel robotic insects developed by a team of Seoul National University and Harvard scientists can jump directly off water’s surface. The robots emulate the natural locomotion of water strider insects, which skim on and jump off the surface of water. Credit: Wyss Institute/Harvard University

“Using its legs to push down on water, the natural water strider exerts the maximum amount of force just below the threshold that would break the water’s surface,” said the study’s co-first author, Je-Sung Koh, who was pursuing his doctoral degree at SNU during most of this research and is now a postdoctoral fellow at the Wyss Institute and the Harvard Paulson School.

Mimicking these mechanics, the robotic insect built by the team can exert up to 16 times its own body weight on the water’s surface without breaking through, and can do so without complicated controls. Many creatures can perform extreme styles of locomotion ― such as flying, floating, swimming, or jumping on water ― with great ease despite a lack of complex cognitive skills.

The robotic insect was built using a torque-reversal catapult mechanism inspired by the way a flea jumps, which allows this kind of extreme locomotion without intelligent control. Cho, Wood, and Koh first reported the mechanism in 2013 at the International Conference on Intelligent Robots and Systems.

For the robotic insect to jump off water, the lightweight catapult mechanism uses a burst of momentum coupled with limited thrust to propel it upward without breaking the water’s surface. An automatic triggering mechanism, built from composite materials and actuators, was employed to activate the catapult.

For the body of the robotic insect, “pop-up” manufacturing was used to create folded composite structures that self-assemble much like the foldable components that “pop-up” in 3-D books. Devised by engineers at the Harvard Paulson School and the Wyss Institute, this ingenious layering and folding process enables the rapid fabrication of microrobots and a broad range of electromechanical devices.

“The resulting robotic insects can achieve the same momentum and height that could be generated during a rapid jump on firm ground — but instead can do so on water — by spreading out the jumping thrust over a longer amount of time and in sustaining prolonged contact with the water’s surface,” said Wood.

“This international collaboration of biologists and roboticists has not only looked into nature to develop a novel, semi-aquatic, bio-inspired robot that performs an new extreme form of robotic locomotion, but has also provided us with new insights on the natural mechanics at play in water striders,” said Donald Ingber, founding director of the Wyss Institute.

This work was supported by the National Research Foundation of Korea, the Defense Acquisition Program Administration’s Bio-Mimetic Robot Research Center, and the Wyss Institute.