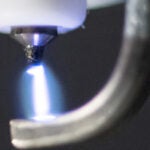 Electrifying invention can save young lives

Traditional industrial robots are rigid — mostly metal — as well as fast, precise, and powerful. Their speed and accuracy come at the cost of complexity and can often pose a danger to humans who get too close. Soft robots are adaptable and resilient but slow, difficult to fabricate, and challenging to make autonomous because most motors, pumps, batteries, sensors, and microcontrollers are rigid.

But what if you could combine the autonomy and speed of a rigid robot with the adaptability and resiliency of a soft robot, and do so relatively cheaply and quickly?

Harvard engineers have done that, developing one of the first soft robots through 3-D printing that moves autonomously. Described in the July 10 issue of the journal Science, the design offers a fresh solution to the engineering challenge that has plagued soft robotics: the integration of rigid and soft materials.

SEAS researchers have built one of the first 3-D printed, soft robots that moves autonomously. The design offers a new solution to an engineering challenge that has plagued soft robotics for years: the integration of rigid and soft materials. This design combines the autonomy and speed of a rigid robot with the adaptability and resiliency of a soft robot and, because of 3-D printing, is relatively cheap and fast. Credit: Harvard Microrobotics Lab

The robot’s body transitions from soft to hard, reducing the stress where the rigid electronic components join the body and increasing the robot’s resiliency. The body’s monolithic design — created in one continuous print job, using several materials — increases its strength and robustness. With no sliding parts or traditional joints, the robot isn’t victim to dirt or debris like its more intricate cousins, making it a good candidate for use in harsh terrains.

“The vision for the field of soft robotics is to create robots that are entirely soft,” said senior author Robert J. Wood, Charles River Professor of Engineering and Applied Sciences at the Harvard John A. Paulson School of Engineering and Applied Sciences (SEAS) and core faculty member at the Wyss Institute for Biologically Inspired Engineering at Harvard. “But for practical reasons, our soft robots typically have some rigid components — things like batteries and control electronics. This robot is a demonstration of a method to integrate the rigid components with the body of the soft robot through a gradient of material properties, eliminating an abrupt, hard-to-soft transition that is often a failure point.”

The combustion-powered robot — reminiscent of a toy rubber popper — is constructed of two main parts: a soft plungerlike body with three pneumatic legs and the rigid core module, containing power and control components and protected by a semisoft shield created with a 3-D printer. The design builds from previous work of co-author and chemist George Whitesides, the Woodford L. and Ann A. Flowers University Professor at Harvard.

To initiate movement, the robot inflates its pneumatic legs to tilt its body in the direction it wants to go. Then butane and oxygen are mixed and ignited, catapulting the robot into the air. It’s a powerful jumper, reaching up to six times its body height in vertical leaps and half its body width in lateral jumps. In the field, the hopping motion could be an effective way to move quickly and easily around obstacles.

“The wonderful thing about soft robots is that they lend themselves nicely to abuse,” said Nicholas Bartlett, first author of the paper and a graduate student at SEAS. “The robot’s stiffness gradient allows it to withstand the impact of dozens of landings and to survive the combustion event required for jumping. Consequently, the robot not only shows improved overall robustness but can locomote much more quickly than traditional soft robots.”

The robot’s jumping ability and soft body would come in handy in harsh and unpredictable environments or disaster situations, allowing it to survive large falls and other unexpected developments.

This new design demonstrates the potential of 3-D printing in soft robotics. Traditional methods of fabrication — custom molds and multistep assembly — are costly and slow. The ever-increasing variety of materials compatible with 3-D printers is allowing engineers to prototype new designs faster. Increased complexity does not necessarily lead to increased cost.

“Soft robotics is a relativity nascent subfield, and 3-D printing is adding to the repertoire of things we can do in a really practical way,” said Wood.

The co-first author of the paper is Michael Tolley of the University of California, San Diego. Co-authors include Johannes T.B. Overvelde and Katia Bertoldi of SEAS; James Weaver of the Wyss Institute; Bobak Mosadegh of Weill Cornell Medical College; and, as noted, Whitesides of Harvard and the Wyss Institute.

This research was supported by the National Science Foundation and the Wyss Institute. Harvard’s Office of Technology Development has filed for a provisional patent on the technology and is pursuing commercialization opportunities.

SEAS serves as the connector and integrator of Harvard’s teaching and research efforts in engineering, applied sciences, and technology. Through collaboration with researchers from all parts of Harvard, other universities, and corporate and foundational partners, it brings discovery and innovation directly to bear on improving human life and society.