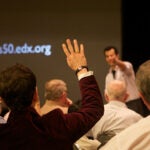 What’s next for Your Harvard

The late Reverend Peter J. Gomes once reflected that, while walking in Harvard Yard toward Memorial Church, “the afternoon sun had just caught the gold and red and blue of the details of the . . . porches, and for the first time I noticed that the building fairly danced in the light. Whoever orchestrated the decoration of those spaces must have known that they would have a startling effect . . . . The moment quickly passed but I have treasured its memory, and I count myself blessed to be working here.”

The four decades Peter Gomes served Harvard as Plummer Professor of Christian Morals and Pusey Minister in the Memorial Church also passed too quickly, but he was, and remains, that light dancing in the Yard. And his effect was startling: as our teacher, preacher, and spiritual guide; as a mediator between old and new Harvard, devout and doubting Harvard, white and black Harvard, straight and gay Harvard, Republican and Democratic Harvard; as the author of best-selling books and the dandy traveler between Cambridges on either side of the Pond; as the speaker for all occasions; as the host of Wednesday tea at Sparks House.

The church Peter led was, when he arrived on campus, not just an architectural contradiction against a panorama of libraries, lecture halls, and administrative buildings; it was a social and spiritual contradiction in one of America’s premier bastions of secular liberalism. Yet, as the rock and restorer of that church, Peter made it seem perfectly placed in space and time.

Like it, he was a man of contradictions. As University President Drew Gilpin Faust observed at his memorial, Peter was “an African-American from Plymouth. A Baptist at the Memorial Church. A Republican in Cambridge. Out of the closet and out of the box.” And there was no need for explanation. To paraphrase the poet Langston Hughes, Peter fashioned out of himself a Harvard that never was but might and should have been, and, along the way, created in his followers the same feeling of belonging about Memorial Church, where each Sunday he preached to the vast middle caught in that beautiful tension between faith and reason.

Peter John Gomes was born in Boston, Massachusetts, on May 22, 1942, to a Cape Verdean father, Peter Lobo Gomes, and a devoted mother and musician, Orissa White. He grew up in Plymouth, Massachusetts, where he attended the public schools, was ordained a minister at the First Baptist Church, served as president of the Pilgrim Society, and maintained a residence not far from where he is buried.

Peter graduated from Bates College in 1965 and the Harvard Divinity School in 1968, and for two years worked as an instructor and administrator at Tuskegee Institute in Alabama before being called back to Harvard in 1970 to serve as Assistant Minister at Memorial Church. In 1974, he was elevated to his seat as Plummer Professor of Christian Morals and Pusey Minister.

By the time Peter’s journey was complete, he had received 39 honorary degrees and been named an Honorary Fellow at Emmanuel College, University of Cambridge, England, where, in 1997, the Gomes Lectureship was established. He participated in two U.S. presidential inaugurations and authored numerous books and articles, including The Good Book: Reading the Bible with Mind and Heart (1996) and Sermons: Biblical Wisdom for Daily Living (1998). A collection of his writings can be found in the posthumous volume his longtime friend Cynthia Wight Rossano edited, Durable Values (2012). In addition to the leadership positions Peter filled around the country, he served as acting director of the W. E. B. Du Bois Institute for African and African American Research at Harvard as well as president of the Signet Society. And he was a critical force in organizing the Harvard Foundation for Intercultural and Race Relations, whose annual Humanitarian Award is now given in his name.

In his forty years on campus, Peter presided at the life passages of individuals, of families, and of the University as a whole. He was the calm at the center of the student crisis in the early 1970s and at an anti-discrimination rally in 1991, where he bravely identified himself as “a Christian who happens as well to be gay,” despite misgivings over being fixed with labels. Instead, Peter was the fixture at our convocations and commencements, weddings and funerals. He served five Harvard presidents, knew them all well, and taught the popular courses “History of Harvard and Its Presidents” and “The Christian Bible and Its Interpretation.” Peter died in Boston at age 68 on February 28, 2011, just as Harvard was gearing up to celebrate its 375th anniversary.

His humor was legendary and always perfectly pitched: “We are by nature a restless people; we aspire to that which is not yet, and not easily achieved. Most of us know in our hearts that this is not the best of all possible worlds, and we also know that we are not the best of all possible people, although we live in Cambridge, Massachusetts.” Three years on from his death, his voice, with its unique blend of timbre and accent, still echoes where he once beheld the light dancing.

And so it seems only fitting to bid him farewell as he once did the Class of 2007 anticipating their Commencement in Harvard Yard:

“We are depending upon you, and upon God, that you will follow your dreams, pursue your great adventures, and be faithful in the pilgrimages upon which you are about to embark. From you who leave we who remain take inspiration and courage, for we have watched you grow up, most of you into fine and able persons capable of much. That you will be tested and meet disappointment and danger we have no doubt, but we know that you have it in yourselves to arrive safely and wisely in a safe haven, and that we will be proud and pleased to have known you.”