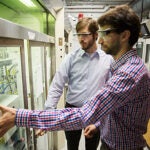 The options for how to spend your free time are almost endless, whether it’s working out at the gym, curling up with a good book, or relaxing in front of the TV. But have you ever considered taking part in scientific research?

With the launch Tuesday of Season Spotter, you’ll have the chance.

The creation of Margaret Kosmala, a postdoctoral fellow, Andrew Richardson, an associate professor of organismic and evolutionary biology, and colleagues at the National Ecological Observatory Network (NEON), Season Spotter is a citizen-science project that aims to recruit Internet users to assist researchers in analyzing images of natural scenes.

“We’re trying to get scientific data out of a set of images that we can’t easily get with a computer,” Kosmala said. “We need to rely on people’s eyes and brains to do the processing for us. We’re asking them to answer simple questions about what they see in these images.”

“We have pretty decent seasonal timing data at specific sites in the U.S. and around the world, but the problem is we don’t have that information for the same time periods across a broad geographic area,” she said. “The idea is we want to see the vegetation’s response to climate change, because that’s going to be important for a number of applications, from agriculture to forestry to tourism, and even things like pollen alerts.”

The images largely come from a network of more than 200 automatic cameras, dubbed the PhenoCam Network, created by Richardson and placed on everything from weather towers to buildings. The cameras overlook landscapes of forests, prairies, shrub, and even tundra, recording at least one image an hour. In many cases they have been in place for several years, resulting in more than 5 million images.

“Analyzing this huge image archive presents all sorts of challenges for us — it’s more than my lab group can do on our own,” said Richardson. “So we are tapping into the power of the Internet to get amateur phenologists from around the world to help us with this task.”

The researchers initially tried to use algorithms to examine the images, but found that queries a human might have handled easily were stumping the computer.

“The questions we’re asking are very straightforward, things like: Are there plants flowering?, Have leaves started changing color?, and ‘Do you see snow in this picture?” Kosmala said. “But those questions turn out to be surprisingly difficult to answer with a computer. For example, when a field starts blooming with yellow flowers, the computer can’t really tell if there are flowers appearing or if the grass is turning yellow. But people can tell immediately.”

In addition to answering questions about the images, users will be asked to draw on some of them — for example, to draw shapes around trees in a picture — to help researchers track changes in specific locations.

Overall, Kosmala said, the questions are designed to be relatively easy — something a user could tackle with a few spare minutes during a lunch break or while waiting for the bus.

“The goal here is if someone just wants to come and try it out for a minute or two, or if someone wants to spend their lunch hour every day doing this, that information is all useful to us,” she said.

The site includes a discussion forum where users can interact with one another and the researchers, and where researchers can share results from the study as they occur.

“Season Spotter provides a great opportunity for the general public to learn about how climate change is affecting the natural world around us,” said Richardson.

“These sorts of projects are really democratizing science,” Kosmala said. “People who may not be professionally trained as scientists can now contribute to real science in a meaningful way, and we can do research at a scale we couldn’t before.”