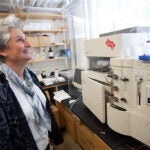 More than half of all U.S. children and adolescents don't drink enough water

More than half of all children and adolescents in the United States are under-hydrated — probably because they’re not drinking enough water — and that could have significant repercussions for their physical health and cognitive and emotional functioning, according to the first national study of its kind from the Harvard T.H. Chan School of Public Health.

The study appeared online in the June issue of the American Journal of Public Health.

“These findings are significant because they highlight a potential health issue that has not been given a whole lot of attention in the past,” said lead author Erica Kenney, a postdoctoral research fellow in the Department of Social and Behavioral Sciences at the Harvard Chan School. “Even though for most of these kids this is not an immediate, dramatic health threat, this is an issue that could really be reducing quality of life and well-being for many, many children and youth.”

Drinking enough water is essential for physiological processes such as circulation, metabolism, temperature regulation, and waste removal. Although excessive dehydration is associated with serious health problems, even mild dehydration can cause issues, including headaches, irritability, poorer physical performance, and reduced cognitive functioning.

The researchers looked at data from 2009-2012 on more than 4,000 children and adolescents aged 6 to 19 years who participated in the National Health and Nutrition Examination Survey, a study of the health of U.S. children and adults conducted each year by the Centers for Disease Control and Prevention. They used urine osmolality — a measure of how concentrated a person’s urine is — to determine whether or not participants were adequately hydrated.

Notably, nearly a quarter of the children and adolescents in the study reported drinking no plain water at all.

“The good news is that this is a public health problem with a simple solution,” said senior author Steven Gortmaker, professor of the practice of health sociology. “If we can focus on helping children drink more water — a low-cost, no-calorie beverage — we can improve their hydration status, which may allow many children to feel better throughout the day and do better in school.”

This study was supported by Cooperative Agreement (including the Nutrition and Obesity Policy Research and Evaluation Network) from the Centers for Disease Control and Prevention’s Prevention Research Centers Program and a grant in memory of Melvin R. Seiden.