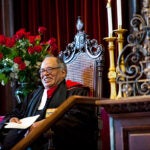 Frank Moore Cross, one of the premier biblical scholars of the past century, died on October 17, 2012, in Rochester, New York, at 91. Cross had held the Hancock Professorship of Hebrew and Other Oriental Languages, Emeritus, the third oldest chair at the university and the oldest in its field in North America, teaching at Harvard from 1957-1992.

The son and grandson of Protestant ministers, Cross was educated at Maryville College (BA, 1942), and at McCormick Theological Seminary (BD, 1946). His essay written during his senior year at McCormick on “The Priestly Tabernacle of Biblical Israel” won him a fellowship for doctoral study in biblical and ancient Near Eastern studies at Johns Hopkins. The judge of the competition was the renowned Hopkins ancient Near Eastern scholar William Foxwell Albright, who then became Cross’s mentor at Hopkins. For his doctorate, Cross worked closely with fellow student David Noel Freedman on two joint dissertation volumes – highly unusual, if not unique in the annals of humanistic scholarship. The first was Early Hebrew Orthography: A Study of the Epigraphic Evidence (published 1952). The second was Studies in Ancient Yahwistic Poetry (published 1964, 1975, 1996).

Leaving Hopkins, where he had been a junior instructor, Cross taught at Wellesley College (1950-1951), and then his alma mater, McCormick Seminary (1951-1957). He came to Harvard in 1957, first as Associate Professor of Old Testament in the Divinity School, and then in 1958 as full professor in the Hancock chair, serving in this capacity in both the Department of Near Eastern Languages and Civilizations and the Divinity School.

Cross had a broad and deep command of the Hebrew Bible and its multiple historical contexts and authored more than 300 publications in that diverse field. He was an expert in the interpretation of biblical literature, making lasting contributions to the understanding of biblical poetry, historical narrative, prophecy, and apocalyptic. He was also in the forefront of those investigating the history of ancient Israel, the matrix of the Hebrew Bible, and its relationships to the ancient Near Eastern cultures around it, especially those of its Canaanite neighbors. A third area was the ancient Semitic languages, particularly the West Semitic group, in which Cross achieved worldwide recognition as an epigrapher and palaeographer. Yet more, he was a major specialist in the textual criticism of the Hebrew Bible; his research yielded new and far-reaching conclusions as to how the biblical text was composed and transmitted. Perhaps most well-known was Cross’s scholarship on the Dead

Sea Scrolls. He was one of the core members of the original team of experts assembled in the Jordanian sector of Jerusalem in the early 1950s to piece together and decipher the often fragmentary Scrolls, and his numerous publications on them included an early and path- breaking synthesis of the Dead Sea Scroll community in its entirety, The Ancient Library of Qumran (1958-1995 in several editions). To the fields of mastery just described, one may add yet a secondary specialty: archaeology. Cross’s serious familiarity with it, including excavation experience in Israel, north Africa, and Sardinia, allowed him to use its results in his historical, exegetical, and linguistic work.

From this wide-ranging scholarship several common features emerge. First, Cross was pre- eminently an historian, concerned to understand the phenomenon of ancient Israel and its immediate legacy in its wider Near Eastern and Mediterranean settings and to do so especially, but not exclusively, through its principal witness, the Hebrew Bible. When theological interests surfaced in Cross’s work, they were carefully tempered to the historical task he identified in the material at hand.

Second, there was his ability to bring to bear on a particular problem an integrated range of skills, linguistic, literary, historical, archaeological, philosophical. Cross moved fluently between the painstaking examination of minute details and a vision of the larger issues and structures to which the details belonged.

Throughout his work – and this is the third point – Cross was guided by an historian’s conviction that every phenomenon, institution, or idea has a pre-existing context from which it develops organically and sequentially, in certain patterned ways. This conviction, as Cross saw it, was particularly important in the study of ancient Israelite religion and the Hebrew Bible, in which, too often, claims for their sui generis character without attention to historical background can be found.

As a final point, one cannot forget Cross’s skill at communication: the explanations were always lucid, if at times complex, and in a chiseled prose that could manage in a few pages what others would need many more to express.

The features that characterized Cross’s scholarship also distinguished his teaching. His courses on the Hebrew Bible and ancient Israelite religion became staples for a broad range of students from beginners to more advanced. At the doctoral level students were put through the exacting rigors of biblical exegesis, Ugaritic, classical Hebrew linguistics, and West Semitic epigraphy. All told, in his three and half decades at Harvard, he was the primary director of over one hundred doctoral dissertations – a record probably unsurpassed internationally in his field. In all of this, Cross was never less than a demanding teacher, setting the bar high in terms of technical competence and broad, humanistic learning. He also had a remarkable knack for taking his students to the very frontiers of knowledge in the field, and imbuing them palpably with the excitement of standing at the brink of new discoveries. To be sure, Cross could at times appear formal, formidable, even fearsome, but beneath the austerity was a warm human being who followed his students’ careers long after they had graduated, and who loved hearing and telling good jokes.

The honors that came to Cross from such a record of achievement were numerous. Among them: seven honorary doctorates, elections to several scholarly academies, the presidencies of several major professional organizations, and four volumes of studies dedicated to him. But most important in his eyes was the success of many of his students, who now hold senior academic positions around the world.