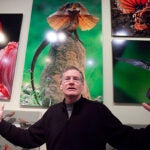 It’s among the cornerstones of biology: All mammals inherit two copies ― one from their mother, the other from their father — of every gene, in part to act as a backstop against genetic problems. If a gene is damaged or malfunctions, its double can pick up the slack.

When it comes to inheritance, however, not all genes are created equal.

Led by Catherine Dulac, the Higgins Professor of Molecular and Cellular Biology, a team of researchers has identified more than 40 new “imprinted” genes, in which either the maternal or paternal copy of a gene is expressed while the other is silenced. The findings, described in a recent paper in eLife, reveal how genomic imprinting can dramatically expand biological diversity, and could have important implications for understanding the brain.

“We looked at a single brain area — the cerebellum — in a very rigorous way, and found 115 imprinted genes, more than 40 of which were brand-new,” Dulac said. “That is a 30 percent increase in the number of known imprinted genes in the mouse, which is significant, but the other important idea this paper explores is the notion that these imprinted genes provide a way for the diversity of the brain to flourish. In addition to the diversity in our genetic sequence, the question of who are we inheriting these genes from adds to the diversity we see across a population.”

The notion of genomic imprinting emerged in the late 1980s, when researchers began manipulating mouse embryos in the moments after fertilization. When sperm and egg fuse to form a zygote, Dulac explained, each temporarily forms a separate pronucleus — one carrying genetic information from the mother, the other from the father. These later fuse to become the nucleus of the embryo.

When researchers began manipulating the pronuclei by replacing the paternal version with a second maternal copy, or implanting two paternal copies, embryos failed to develop.

“That was very surprising,” Dulac said. “At the time, it was believed that you simply needed two copies of each gene, but this suggested that some genes are expressed only from one of the two parental genomes, and you need both to give rise to a full-blown organism.”

After first focusing on the cerebellum, Dulac’s team expanded its analysis to the entire brain.

The surprise came in part because scientists have long believed that if a gene is imprinted in one tissue, it is likely imprinted through most of the organism’s tissues, including through the brain.

“But we don’t think that’s the case,” Dulac said. “We think there’s some very interesting regulation of imprinting from the brain to non-brain tissue, and even from one brain region to another.”

While genomic imprinting is often thought to silence one copy of a gene, the study showed that many imprinted genes aren’t completely silenced, but rather show a bias toward one copy.

“So there may be 70 percent expression from the maternal allele, and 30 percent from the paternal,” Dulac said. “It’s not all on or all off.”

To understand whether these biases have biological significance, Dulac and colleagues targeted a gene called Bcl-X, which, in the adult cerebellum, is expressed 60 percent from the paternal genome and 40 percent from the maternal, and helps prevent cell death.

“Our question is, ‘Does the brain care about that bias?’” Dulac said. “If it doesn’t we could remove either copy of the gene, and it shouldn’t matter. But if that bias ― even though it’s not particularly strong — is important, when we remove the more highly expressed copy of the gene, we should see a different phenotype emerge.

“When we did this, the results were spectacular. When we removed the paternal copy, we obtained mice with brains that were 15 to 20 percent smaller than mice in which we removed the maternal copy or mice which had both copies.”

Importantly, Dulac said, tests showed that, in the cortex, inhibitory neurons were more affected by the change.

Many researchers believe that the ratio between excitatory and inhibitory neurons plays a key role in brain development, Dulac said, and that an imbalance between the two types could be related to a number of disorders, including autism and schizophrenia.