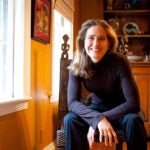 To date, the project has led 36 programs in five Boston Public Schools (BPS) sites, including the Jackson/Mann K-8 School, the Mission Hill K-8 School, and the Boston Teachers Union, teaching basic computer science skills to 500 students in the process. The project had an international scope when it was founded in 2008, working with the program One Laptop Per Child. But when Silver became president in 2013, he wanted to focus more on schools right here at home.

“I wanted it to be more locally focused and education focused,” he said. “We reached out to BPS and started a teaching program, and now that’s what DLP is today. We’re now an organization with a full program, and I think that’s because Harvard students are in schools every week, seeing the real impact they can have.”

Every week during the school year, as many as 50 Harvard students volunteer in local schools through the project, teaching the basics of computer science and providing young students with skills they need to succeed.

“It’s extremely important because technology is going to be a big requirement in the future,” said Yang, who will succeed Silver as president of the organization during the coming school year. “It’s really worthwhile to engage students early with computer science, and we have an obligation to help the community, too. We would love to work with more schools, particularly schools in Allston and Brighton.”

Vijayakumar began working with the project as a teacher when she arrived on campus as a freshman. She is now the organization’s director of community engagement.

“I knew I wanted to do something that combined computer science and service work,” she said. “As director, I reach out to BPS and other community organizations, such as the Harvard Ed Portal, to create partnerships with schools.”

“Jackson/Mann was thrilled to hear from DLP and [to] work together to bring the program into our school,” said Jackson Mann Principal Andy Tuite. “Our students have the opportunity to learn state-of-the-art computer science skills that will serve them well throughout their lives. We’re grateful for the hard work and dedication the Harvard undergrads have shown to our students.”

“What’s great about DLP is that the curriculum is really strong,” Vijayakumar said. “It was created by Harvard students, and it’s a great curriculum. When you look at Girls Who Code and CodeEd, those skills are really important. The fact that we’re exposing them to computer science and giving them an interest, something they can explore in the future … that small spark gives them a path they might not have considered or explored before.”

The organization brings students to the annual CS50 Fair on campus, and works together with the Ed Portal to bring students to Scratch Day, an event where students gather to code.

“Last year, we invited all our students to the CS50 Fair, and about 120 of them came,” Silver said. “They loved it. We gave them a scavenger hunt so they had to ask Harvard students questions. Dr. Margo Seltzer [Harvard’s Herchel Smith Professor of Computer Science] talked to them about being a computer scientist and what that means. It was one of the biggest impacts that we’ve had.”

For Silver, the key word in the project’s mission statement is empowerment.

“The places we go to, the students are often underserved and socioeconomically challenged,” he said. “Our hope is that in providing them access to these skills, they’ll be able to go wherever they want in the world.”

Harvard President Drew Faust echoed that wish in a recent column in Harvard Magazine, where she mentioned the project and said, “We ought to do everything we can to ensure that as many young people as possible can imagine their futures here or elsewhere, free to look up, look out, and realize their dreams.”