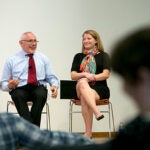 Disabilities, pushed to the side

Three Harvard faculty members, the largest number selected from any one institution, are among 26 scientists from across the United States to be appointed as investigators by the Howard Hughes Medical Institute (HHMI).

Levi Garraway, associate professor in the Department of Medicine at Harvard Medical School, Pardis Sabeti, associate professor at the Center for Systems Biology and Department of Organismic and Evolutionary Biology at Harvard and the Department of Immunology and Infectious Disease at the Harvard T.H. Chan School of Public Health, and Tobias Walther, professor of genetics and complex diseases at the Harvard Chan School, were chosen for their individual scientific excellence from more than 800 applicants representing a variety of disciplines from institutions nationwide.

“Scientific discovery requires original thinking and creativity,” said HHMI president Robert Tjian. “Every scientist selected has demonstrated these qualities. One of the most important things we can do at HHMI is to continue to support and encourage the best discovery research. We don’t know this for certain, but the ideas that emerge from these labs might one day change the world, and it’s our privilege to help make that happen.”

HHMI provides each investigator with a full salary, benefits, and a research budget over his or her initial five-year appointment. The institute also covers other expenses, including research space and purchase of critical equipment. Investigators’ appointments may be renewed for additional five-year terms contingent on a successful scientific review.

HHMI encourages its investigators to push their research fields into new areas of inquiry, even if that means changing directions in their research. Moreover, they have support to follow their ideas through to fruition — even if doing so takes many years.

“Our essential job is to identify and support the best people we can find,” said Erin O’Shea, vice president and chief scientific officer of HHMI and a professor in Harvard’s departments of Molecular and Cellular Biology and Chemistry and Chemical Biology. “If you study the accomplishments of the scientists we have selected, you will find they are an amazing group of talented individuals. Many are already considered leaders in their fields and some have established entirely new fields of research.”

Levi Garraway’s research explores how genetic and molecular alterations in tumor cells cause cancers to grow and spread, and how this knowledge can inform new therapeutic avenues. His team’s studies of melanoma and prostate cancers have turned up entirely new classes of cancer-causing genes. In addition, his research group was the first to identify prevalent cancer-promoting mutations in parts of the genome that do not encode proteins. Garraway also studies how tumors become resistant to cancer drugs, and he and his colleagues have used systematic genetic screens to identify how cells become resistant to targeted therapies.

“I am so grateful to the HHMI for recognizing our work,” Garraway said. “This award is a testament to the efforts of the amazing people who have worked tirelessly as part of my research team, and to the scientific and career mentors who supported me steadfastly over the years. Going forward, I will use these funds to gain a deeper understanding of how to identify and overcome the mechanisms that cancer cells use to resist treatments that should otherwise eliminate them. We hope that this work will uncover underlying principles that lead to new therapeutic strategies relevant to many cancers in the future.”

Garraway’s lab is also a pioneer in the field of precision medicine, adapting genomic technologies to survey patients’ tumors for hundreds of cancer gene alterations to create tumor profiles that can be used to identify the best candidates for clinical trials and, in the future, tailor treatments to individual patients.

Pardis Sabeti uses the evolutionary record embedded in the human genome to inform new understanding of disease. Her computational methods for detecting recently evolved traits have uncovered genetic adaptations that, for example, altered human resistance to malaria, hair and sweat development, and immune responses to bacteria.

When Sabeti’s analyses led her to a human gene associated with increased risk of infection by Lassa virus, a devastating pathogen that kills thousands each year in West Africa, she and her colleagues developed a research program for biosafety level-4 (BL-4) viruses in rural parts of Nigeria and Sierra Leone to study the virus and its role in human evolution. In the weeks following last year’s outbreak of Ebola, Sabeti’s team applied the tools they had developed for studying BL-4 viruses to rapidly sequence and analyze 99 viral genomes from infected patients in Sierra Leone. Their data revealed how the virus was mutating and informed strategies for diagnosing the disease and curbing its spread.

Tobias Walther is the first faculty member at the Harvard Chan School to be appointed an HHMI investigator. His research is focused on the molecular mechanisms behind lipid storage in cells. With scientific partner Robert Farese, he has identified more than 200 genes that regulate lipid storage and discovered there are two classes of lipid droplets: small, static droplets and larger droplets that expand as needed. Walther showed how enzymes involved in synthesis of triglycerides (one type of lipid stored in the droplets) locate and engage with the expanding droplets to build new triglycerides. His team also studies how membrane lipids not stored in droplets are kept in balance inside cells. Ultimately, Walther aims to determine how alterations in lipid stores affect physiology and disease.

“The appointment by HHMI is fantastic news for us,” Walther said. “The group and I are honored by the recognition of our science. The freedom associated with this appointment will allow us to focus on elucidating the mechanistic underpinnings of lipid storage and homeostasis, and the physiological functions of these processes.”