Science, on the edge 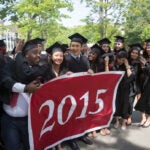 Cambridge eighth-graders immerse themselves in the future during Harvard showcase

Luka Berman argued that laws should allow, but limit, the use of such engineering. “It has unbelievable potential for people around the world, but we need to establish parameters that make sure it’s only used in the best way, and to benefit all of us,” he said.

Absolutely not, countered Edwin Owusu. “There should be no laws to limit genetic engineering,” he said, declaring that limiting scientific exploration hinders the possibility of “huge success.”

Ultimately, the audience members were invited to vote: Should genetic engineering advance wherever it might lead, or should boundaries be put in place early? More importantly, who should decide where those boundaries would lie?

The debate was held on the Harvard campus, but the Rindge Avenue Upper School eighth-graders led the discussion. Along with 400 of their peers, the students were on campus for the fifth annual Cambridge Public Schools Student Science and Engineering Showcase at Harvard. This program is one of the many collaborations between the University and the local schools, and it brings all Cambridge eighth-graders to Harvard’s campus.

David Suchy, a teacher at Rindge Avenue, helped the students grapple with the ethics of genetic engineering and develop their arguments. “We got into some heated debates,” he said, adding that it took students two weeks to finalize their proposals.

Sponsored by the Harvard John A. Paulson School of Engineering and Applied Sciences (SEAS), the showcase celebrates local students’ achievements in science, offering them the opportunity to present their research, tour Harvard, participate in demonstrations with graduate students, and delve deeper into science.

Paul Andrew, vice president for public affairs and communications, was on hand to welcome the eighth-graders to Harvard and celebrate their work.

“Science is important to your future and to the future of the city of Cambridge, our nation, and the wider world,” Andrew said. “The projects you’re working on — from robotics to biology to archeology to the environment — are among the areas of scientific research that will help make the world a safer, greener, healthier, and better place.”

Thanking partners at Cambridge Public Schools for their work in making the day possible, Andrew said, “We’re proud to be part of the Cambridge community, and we want you to know that you’re part of the Harvard community, too.”

Jessica Huizenga, assistant superintendent for curriculum and instruction with the Cambridge schools, told the students the showcase was an opportunity for them to display not only their creativity and curiosity, but also their perseverance and persistence.

Perseverance and persistence, she said, “led to the invention of the light bulb, the computer, the cell phone.” Applying them, she said, will help the students “to go out and transform your communities, and to transform the world with your innovation.”

Cambridge Mayor David Maher urged the students to focus on science and innovation, since the city is a major center for those fields.

“We have an innovation economy in Cambridge,” he said. “Each and every person in this room should be proud that some of the best medical research in cancer, Alzheimer’s, muscular dystrophy, diabetes — it’s all happening right here in Cambridge. We want Cambridge kids in those jobs here in Cambridge. As a community, we have great hopes for what all of you will accomplish in the future. There are endless possibilities for what you can do and accomplish.”

Kathryn Hollar, director of educational programs at SEAS, said having so many local students on campus was “incredibly energizing.” She added that coordinators hope that by talking with scientists and researchers at Harvard, the eighth-graders would be galvanized to continue in the field.

Alicia Roth, a teacher at Vassal Lane Upper School, said the students were “really proud and excited to do the experiments and present their findings. And bringing their findings here to Harvard, to see some of the research that’s going on here… I don’t know if they would get to have that opportunity elsewhere. It’s a big deal, and everyone here is so excited about science. I love being part of it.”