Getting to know the lab 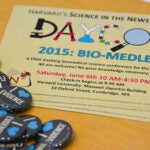 “Soft robotics have become extremely prevalent in the last few years because 3-D printing is so available,” he said. “Manta rays are ideal for study because they’re incredibly efficient. So one of the goals for this project was to make an underwater hydraulic implementation of a manta ray’s wing.”

Not bad for a high school senior.

Ingersoll and four of his peers, all students at Cambridge Rindge and Latin School (CRLS), were at the Harvard BioLabs Lecture Hall in late May to present the work they had completed as participants in the CRLS Marine Science Internship program at Harvard.

Ingersoll partnered with Donal Holland, a visiting lecturer at the Harvard John A. Paulson School of Engineering and Applied Sciences (SEAS), while his peers worked on different projects at other labs across the University. By pairing them with Harvard labs, the internship program gives students firsthand experience of how science works, and even a role in research.

CRLS senior Eleanor McCartney presented findings on two separate projects, both for the lab of Colleen Cavanaugh, the Edward C. Jeffrey Professor of Biology. In the first project, she studied endosymbiont infection in the bivalve Solemya velum (or, how outside agents infect a clam), while the other focused on bacterial symbiosis in protist Arcella (how bacteria and amoebae live in harmony). Like her peers, McCartney came to work in the Harvard lab Monday through Thursday in the spring semester.

“It was definitely the steepest learning curve I’ve ever had,” said McCartney, who will attend Smith College in the fall. “But I would absolutely do it again. I know I want to study science in college, and it can be difficult for undergraduate students to get access to research labs. So to be in the lab, not washing dishes but really contributing to the research and the science, was amazing.”

McCartney will continue her research in the Cavanaugh lab this summer.

Professor John Wakeley, chair of the Department of Organismic and Evolutionary Biology (OEB), was impressed with how much the students learned.

“I know a lot of these kids, and their presentations were wonderful,” he said. “The relationship between high schools and Harvard is crucial. The least we can do, as an institution, is support the community and help train students, show them how science actually works at the ground level. I think a lot of the research we saw presented today will end up on published papers with the students’ names on them.”

In fact, the interns’ work will be featured in the Journal of Emerging Investigators, which was founded by Harvard graduate students to publish original research in the biological and physical sciences by middle and high school students.

Paul McGuinness, who teaches marine biology at CRLS, has worked closely with Peter Girguis, a professor of organismic and evolutionary biology and an adjunct research engineer at the Monterey Bay Aquarium Research Institute, to establish the internship program at Harvard. For McGuinness, the presentation reflected both the hard work the students did in the lab, and how the labs benefited from the real science the students created.

“It’s a great model in terms of the intensity and expectations for students ― it’s completely different from any other experience they can have as high school students,” he said. “The impetus and onus is on them. They get support from me, and from the mentor in their lab, but it’s an amazing opportunity for students to get experiencing doing real research in a real lab.”

His hope, he added, is to give as many students as many opportunities as possible. But the marine science internship program “is the capstone project. It lets them show what they’re capable of, and there’s nothing else like it.”