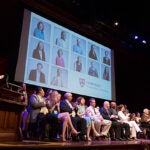 They get the job done

Douglas W. Elmendorf, A.M. ’85, Ph.D. ’89, a leading economist and former Harvard faculty member who recently concluded his service as the highly regarded director of the U.S. Congressional Budget Office (CBO), will become the next dean of Harvard’s John F. Kennedy School of Government, starting in January.

“Doug Elmendorf is an outstanding public servant, an admired mentor and teacher, and a distinguished economist deeply immersed in the interplay of research and policy — an experienced leader in government who embodies the Harvard Kennedy School’s commitment to joining scholarship, education, and practice to serve the public good,” said President Drew Faust today in announcing the appointment. “As director of the CBO, he won widespread praise for his leadership and management skills, his integrity and fairness, his intellectual curiosity and analytical acuity, and his ability to work thoughtfully and constructively with people across the political spectrum.

“His incisive mind, his openness to different perspectives, his instinct for collaboration, and his engaging and collegial style have propelled his success in a series of roles,” Faust added. “I am confident he will guide the Kennedy School with foresight and energy, a deep appreciation for the full breadth of the School’s diverse pursuits, and a constant dedication to its high ideals.”

“I am honored to have been chosen by President Faust to serve as dean of the Harvard Kennedy School,” said Elmendorf. “During my public service, I have seen firsthand the essential role of innovative policy ideas and outstanding people to put those ideas into practice, and the Harvard Kennedy School is the pre-eminent provider of both to governments in this country and around the world. I am eagerly looking forward to working with the School’s extraordinary faculty, staff, students, and alumni to build on all that has been achieved under the strong leadership of David Ellwood and his predecessors as dean. Together, we will honor and extend the School’s commitment to confronting hard problems in ways that enhance public policy and improve people’s lives.”

From January 2009 until March of this year, Elmendorf led the CBO, the nonpartisan federal agency responsible for independent analysis of budgetary and economic issues to support Congress. In that role, he is credited with having ably led an organization with a staff of 235, most of them economists, public policy analysts, and others with advanced degrees. In his work with and for members of Congress, he drew admiration from both sides of the aisle for his acumen, objectivity, and nonpartisanship.

Elmendorf first served at the CBO from 1993 to 1995, where his work as an analyst earned him the CBO Director’s Award. He next served as an economist for the Federal Reserve Board (1995-98), senior economist for the Council of Economic Advisers (1998-99), and deputy assistant secretary for economic policy in the Treasury Department (1999-2001). He returned to the Federal Reserve in 2001 and took on leadership roles as chief of the macroeconomic analysis section (2002-06), and then as assistant director of the research and statistics division (2004-07).

From 2007 to 2009, he was a senior fellow in economics and Bernstein Scholar at the Brookings Institution, serving as co-editor of the Brookings Papers on Economic Activity and, in 2008-09, as director of the Hamilton Project, which focuses on creating innovative policy proposals to stimulate economic growth. He was appointed by the speaker of the House and the president pro tempore of the Senate to serve as director of the CBO starting in January 2009.

Elmendorf has written numerous research papers on economics and public policy matters, testified many times before Congress, and given dozens of presentations and lectures on a range of topics at universities and elsewhere.

In announcing Elmendorf’s appointment, Faust expressed her gratitude to the “many people within and beyond the Kennedy School [who] offered thoughtful counsel as the search progressed. I am grateful to all of them — especially to the members of the faculty advisory committee, who invested exceptional time and care in a vitally important process.”

Faust also thanked Archon Fung, the Ford Foundation Professor of Democracy and Citizenship, who, as previously announced, will serve as acting dean from July 1 until Elmendorf takes up his duties in January.

In addition, she recognized Ellwood, who will step down at the end of June after 11 years as dean, “for his splendid leadership, which has done so much to drive the School forward and to enable its future progress.”

“I am thrilled with the choice of Doug Elmendorf,” said Ellwood. “Doug has a distinguished record of public service, scholarship, and institutional leadership. His combination of talent, insight, integrity, collaborative style, generosity of spirit, and deep commitment to public service positions him to be an outstanding dean.”