Disabilities, pushed to the side 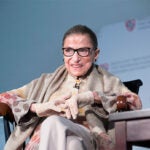 Students with extra challenges explain how they got to Harvard

Thomas Hehir, Ed.D. ’90, the Silvana and Christopher Pascucci Professor of Practice in Learning Differences at the Harvard Graduate School of Education (HGSE), spent much of his career helping children with disabilities, including a decade teaching in Boston Public Schools. But when he came to Harvard to teach, he found a surprising number of students with disabilities of one sort or another in his own classes.

“I didn’t expect that I would have so many students who were disabled,” said Hehir, who was director of the U.S. Department of Education’s Office of Special Education Programs during the Clinton administration. “It was very different from my experience when I was getting my doctorate at Harvard. Back then, I don’t remember a single student with a disability: no deaf students, no blind students, none who used wheelchairs or identified as dyslexic. So 20 years later, I was really interested in finding out how their educational histories led them to Harvard. So I asked: ‘How did you get here?’ ”

Hehir’s question became the title of “How Did You Get Here?,” a publication of interviews and stories from 16 undergraduate and graduate Harvard students with various disabilities. Speaking at the Ed Portal, Hehir and one of his co-authors, Laura Schifter, Ed.D. ’14, an adjunct lecturer at the Harvard Graduate School of Education, said recently that there were specific themes that ran throughout the stories — themes that were common across disabilities.

In fact, when Hehir posed his first question of how students got to Harvard, almost all of them immediately answered: “My mother.”

“It was an absolutely reflexive response: They didn’t even have to think about it,” he said, noting that one student said her father was the primary reason. “That’s a huge theme in all the interviews, an inordinate role. Parents played an enormous role in the success of their children.” Hehir added that some parents even went so far as to become their children’s service providers in school.

Another common theme involved having a teacher who believed in them. Sometimes, “It was very small things these teachers did that had enormous repercussions,” Schifter said. She shared a story of Amy, a blind student who was being “sectioned off or segregated” in her second-grade classroom.

“Another teacher saw this occurring and decided to call Amy’s mom at home and tell her what was going on,” Schifter said. “Amy’s mother then went in and advocated for her child to keep her included in the classroom. Amy herself said that changed her life, because she hated being sectioned off, feeling different. She feels like, to this day, that teacher’s decision to call her mom changed the direction of her life.”

In addition to standing up for them, Schifter said, life-changing teachers also had high expectations for these students, and let them know that their instructors believed in them. A student named Kevin, who is in a wheelchair, recalls that he stopped communicating when he was put in an early intervention program.

“Often, when kids don’t communicate, people assume they are not intellectually capable,” Schifter said. “But the teacher in that program made sure to tell his parents, ‘Don’t believe anything anyone says about your son unless it’s positive.’ That really changed the expectations that his parents had for him. It turned his life in another direction. So there are small but very powerful things that teachers can do that will affect the lives of these kids for years to come.”

Rashid Dumbuya, a human rights lawyer and activist originally from Sierra Leone, was in the area when he heard about the Ed Portal event. Knowing that there are students with such disabilities at Harvard, while better understanding how they achieved such academic success, he said, could have an immense impact on students with disabilities around the world.

“It makes a lot of difference,” he said. “To know this opportunity exists for such persons anywhere in the world is a game-changer. I’m going back rejuvenated and determined to share this message with my country. Opening this event to the public, inviting the community to come and hear these stories, learning more about what’s happening here … it enables people to go back and make a difference in their own work as well.”