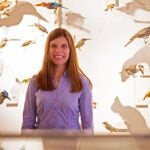 In December 1974, the last cases of smallpox in its deadliest form were confined to a Bangladesh slum. Public health workers were preparing the scourge’s coup de grâce, but were horrified when government bulldozers arrived, scattering 50,000 people across the countryside.

The ill-timed demolition of the slum spread the disease throughout the country, sparking outbreaks in several locations and extending the suffering and death from smallpox for another 10 months. The chapter illustrates the difficulty of ridding the world of a human disease, even one down to its last few cases, and how important it is that eradication efforts include whole societies.

A group of scientists, government officials, nonprofit leaders, malaria-control program directors, and others gathered at Harvard Business School last week sought to draw lessons from past eradication efforts as they embarked on a weeklong leadership program focused on eradicating another age-old scourge: malaria.

Though the program’s 56 participants have been involved in different aspects of the fight against malaria for years, Dyann Wirth, the Richard Pearson Strong Professor of Infectious Disease, chair of the Harvard T.H. Chan School of Public Health’s Department of Immunology and Infectious Diseases, and director of the Harvard Malaria Initiative, said that shifting officials’ focus from control and treatment of the disease to eradication requires shifting strategies as well.

“We want to give them the overview of the problem of malaria, all the way from the genes to the globe,” Wirth said. “Many of them work [on malaria]… and although most in the room probably have had this material at one point, they haven’t thought about it in this lens of elimination/eradication, which is quite different from treating symptomatic cases or preventing symptomatic cases.”

Smallpox stands as the only human disease successfully stamped out, so the intensive leadership program kicked off with a talk by Myron Levine, a University of Maryland professor who was a World Health Organization (WHO) consultant in Bangladesh during the final days battling smallpox’s most virulent strain, variola major. It would take another two years to eradicate a less deadly strain, variola minor, though there were laboratory-related cases in 1978.

Global anti-malaria efforts have made significant progress, Wirth said, with cases down 30 percent and deaths down 50 percent over the last 15 years. Even with that decline, however, malaria is far from on the ropes. In 2013 alone, there were an estimated 198,000,000 cases and 584,000 deaths, according to the WHO.

The program is a partnership of organizations including Harvard, the Barcelona Institute for Global Health, and the Swiss Tropical and Public Health Institute, with funding from several other organizations.

Malaria may not become the second human disease to be wiped out. That’s because efforts targeting two other ailments, polio and guinea worm disease (which is caused by a tropical parasite), are on the verge of success, with the number of cases reduced to just a handful.

Elizabeth Juma, a research scientist with the Kenya Medical Research Institute, said malaria remains a major health problem there and is the biggest cause of death for children under 5. It’s widespread in the nation’s agricultural areas, making it an issue in agricultural production. Juma said she decided to attend the session to understand how the goal of elimination in Kenya would affect ongoing control efforts.

“The global goals have changed,” Juma said. “We now have to think of malaria elimination. [I decided to attend] to just find out … what should we do about a country such as ours, where this has been attempted in the past, and how best can we think about the endgame, which is elimination.”

Ndukwe Ukoha, a malaria specialist for the Health and Strategy Delivery Foundation, a Nigerian nonprofit that provides technical assistance to the government on health issues, said malaria is also a major public health concern in Nigeria. As Africa’s most populous country, with 184 million people, efforts to reduce malaria there will have an impact on the global disease burden, Ukoha said.

“We are presently controlling malaria in Nigeria, [but] we also need to look at new ways of doing things, new ways of developing more effective tools, because … presently there are issues around resistance and also health system issues,” Ukoha said. “So this kind of forum provides an avenue to talk about these, and even learn from countries where they have successfully achieved high success.”