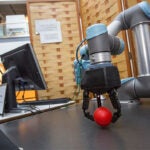 While chimps can’t make meals, they do understand basics of heating food, and appreciate it, study says

These days, cooking dinner requires no more thought than turning a knob on a stovetop. But for early humans the notion that, by applying heat or fire, foods could be transformed into something tastier and easier to digest demanded huge cognitive insight — of the kind often believed to be limited to humans.

New evidence, however, suggests that, when it comes to cooking, humans may need to make more room at the table.

A new study, co-authored by Felix Warneken, the John L. Loeb Associate Professor of the Social Sciences, and Alexandra Rosati ’05, a postdoctoral fellow in the psychology department of Yale University who will join Harvard’s Department of Human Evolutionary Biology as an assistant professor this summer, suggests that humans’ cognitive capacity for cooking is shared by chimpanzees. That includes a preference for cooked food, the ability to understand the transformation of raw food into cooked food, and even the ability to save and transport food over distance for the purposes of cooking.

The findings suggest that those abilities emerged early in human evolution, and that aside from control of fire, chimps may possess all of the requisite cognitive skills to engage in cooking. The study is described in a June 3 paper in the journal Proceedings of the Royal Society B.

“It is an important question when cooking emerged in human evolution,” Warneken said. “We thought one way to get at this question is to investigate whether chimpanzees, in principle, have the critical cognitive capacities for cooking. If our closest evolutionary relative possesses these skills, it suggests that once early humans were able to use and control fire they could also use it for cooking.”

A number of earlier studies, particularly those led by Richard Wrangham, the Ruth Moore Professor of Biological Anthropology and Curator of Primate Behavioral Biology in the Peabody Museum of Archaeology and Ethnology, have hypothesized that cooking played a key role in human evolution by making food more digestible and enabling early humans to extract more energy from their diet.

In trying to understand the evolutionary origins of cooking, however, those earlier studies largely focused on what is clearly a critical aspect of cooking: the control of fire. Warneken and Rosati decided to approach the question from an alternate direction.

“People focus on the control of fire because that seems so salient, but even if you had a fire stick, several other insights are required before you can use it for cooking,” Rosati said. “Obviously, chimps can’t control fire, but we were trying to hypothesize about some of the other aspects of cooking, like the causal understanding that if you put this raw food on the fire it creates cooked food, or, at the extreme end of our study, the ability to plan. What’s particularly interesting about cooking is it’s something we all do, but it involves a number of capacities that, even without the context of cooking, are thought to be uniquely human. That’s why we wanted to study this in chimpanzees.”

To get at those questions, Warneken and Rosati in the summer of 2011 traveled to the Jane Goodall Institute’s Tchimpounga Chimpanzee Sanctuary in the Republic of Congo, where they conducted a series of experiments using wild-born chimpanzees to test whether they were capable of making the mental leaps necessary for cooking.

Their first tests were dedicated to replicating the results of other studies: demonstrating that chimps preferred sweet potato that had been “cooked” — placed in a hot pan, without butter or oil, for one minute — to raw, and showing that the chimpanzees were willing to pay a temporal cost, in the form of a minute-long wait, to obtain the preferred cooked food.

Subsequent tests were aimed at gauging whether chimps truly grasped the transformation from raw food to cooked, and whether they would spontaneously attempt to “cook” items.

To explore those questions, researchers presented chimps with a “cooking device” that turned raw potato into cooked slices, and a control device that left it unchanged. During the critical test, chimpanzees saw raw sweet potato go into both, but had to choose one device before seeing its (possibly transformed) contents. Warneken and Rosati said that nearly every chimp reliably picked the cooking device, suggesting they quickly understood the transformation that was at work.

It was the last experiment, however, that truly revealed chimps’ capacity for cooking, the researchers said.

“We had done one season of testing, and we thought what we had was interesting, but then we wondered if they might be able to hold onto the reward and actively choose to put it in the cooking device,” Warneken said. “That’s really tough because usually when chimps have food, they eat it.”

“I thought there was no way they were going to do this,” Rosati added. “There is quite a lot of research that says animals have problems with self-control when it comes to possessing food, but we were leaving the sanctuary in a few days so we decided to try it.”

To their surprise, she said, a number of chimps, when given a raw piece of potato, chose essentially to cook it by placing it in the “cooking device” and receiving a cooked piece of food in return.

“The first time one of the chimps did this, I was just amazed,” Rosati said. “I really had not anticipated it. When one of them did it, we thought maybe this one chimp is just a genius, but eventually about half of them did it.”

The result left Warneken and Rosati with a host of additional questions that would have to wait until they returned to the Congo the following summer. Among them was whether chimps’ apparent understanding of the cooking process extended to other foods. Just as chimps used the “cooking device” to transform raw sweet potato into cooked, tests showed that they did the same with carrots.

“The key thing here is that they had never seen carrot being put in these devices,” Rosati explained, “but they were still able to generalize that process.”

The chimps did not blindly try to cook everything, however. In another test, when chimps were given a piece of raw potato and a small piece of wood, they only put the potato in the cooker, suggesting they understood that only edible items could be cooked.

“That shows they don’t simply view this as a trading situation,” Rosati said. “They’re not interested in putting any random thing in the cooking device. You might expect them to put both in because they’d get twice as much, but they really don’t care about the wood piece.”

In the final two experiments, Warneken and Rosati focused on one of the most pressing current questions in animal cognition: whether animals are capable of planning for the future.

Though a handful of studies have suggested that chimps are capable of keeping tools for later use, “those studies are very different from cooking,” Rosati said. “A tool can be valuable because you can use it in the future, but you can’t eat it now. When it comes to cooking, you have something — food — that has intrinsic value.”

Despite that value, chimps were willing to transport food for the opportunity to cook it. When given pieces of raw potato on one side of an enclosure, a number of chimps showed a willingness to carry them four meters to the cooking device on the opposite side.

“In some cases, they actually carried it in their mouth, and you could see that sometimes they would eat it, almost by accident,” Rosati said. “This was a hard problem, so they were less likely to put it in the cooking device if they had to carry it, but they did succeed about half the time, so they were able to do it.”

To test whether chimps would save food in anticipation of cooking it later, in several tests chimpanzees were given food, but Warneken appeared with the cooking device three minutes later.

“At the beginning, this is a very difficult inference,” Rosati said. “But later on, they understood that he’s going to come back, so if they can hold onto the food for that three minutes, they can transform it into cooked food. In the control condition, they got the same amount of food, but he never showed up. If they didn’t think they were going to be able to cook the food, they ate it.”

To their surprise, Warneken and Rosati said, several chimps were able to perform the task, and two saved nearly every piece of raw food they were given for it to be cooked later.

While the study supports the notion that cooking behavior emerged early in human history, Warneken and Rosati said it may also suggest a new account for humans’ control of fire.

“We can’t date the control of fire with cognition studies, but we can start to date these other skills that come into play for cooking,” Rosati said. “This type of comparative psychological evidence can tell us a great deal about our evolutionary past. I think it supports the idea that cooking emerged early in human evolution, because it suggests all the cognitive pieces were there. All we needed was control of fire.”

Though the assumption had long been that humans controlled fire before they began using it for cooking, Warneken and Rosati suggest that cooking may have given early humans a reason to control fire.

“Why would early humans be motivated to control fire?” Rosati asked. “I think cooking might give you a reason. We know wild chimps will observe natural fire, and they even sometimes seek out and eat cooked food left behind by it. The evidence from our cognitive studies suggests that, even before controlling fire, early hominins understood its benefits and could reason about the outcomes of putting food on fire.”