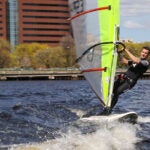 At one point or another, we all wonder what to believe. One study warns of the harm of caffeine, another touts the benefits of coffee in moderation. Too much red wine can wreak havoc with your liver, but an occasional glass could actually improve heart health.

The phenomena that affect our daily lives and the world around us can be tricky to parse. But a committed group of students at Harvard is helping clarify scientific research and results.

For 16 years, Science in the News (SITN) has brought scholars and the public together. Through seminars, lectures, and blog posts, the group has worked to make the science behind important breakthroughs accessible and understandable to non-scientists.

They even pair science and beer. The popular series Science by the Pint invites professors from around Boston to discuss their research at local pubs. Recent topics have included nanotechnology, the origins of the cosmos, and natural selection.

Now SITN has a new teaching forum. This month the group hosted its first daylong conference for the public. DayCon 2015: BioMedley focused exclusively on biomedicine and included talks from Harvard graduate students on cancer, infectious diseases, cholera, global health, and diabetes. The event was sponsored by the Harvard Integrated Life Sciences program and Addgene, a nonprofit organization that facilitates research and discovery by helping scientists share DNA-based materials called plasmids.

Scientific conferences are typically “restricted to academia in both the content level and costs,” said SITN co-director Stephanie Guerra. “With that in mind, we decided we could take the skills that Science in the News has developed over the past 16 years and use them to develop a free science conference aimed at the general public.”

“We want to open up that conversation between scientists and non-scientists with the hope that people will be able to better understand the science, but also trust it as well.”

A distrust of research can affect how a person votes on any number of issues or “even inform policy decisions,” at the state and federal levels, Guerra added.

The group doesn’t shy away from controversial subject matter. Guerra, who got involved with SITN in 2013 during her second year at Harvard, said her first talk, on genetically modified organisms, generated some push-back and lively discussion. But interacting with people who “aren’t engrossed in the science from day to day” yields important perspectives, she said, and audience members regularly ask questions that scientists “have not thought of to ask.”

Helping scientists develop their own communication skills is a second goal of SITN, which uses peer- and audience-feedback forms to help speakers polish their message and delivery.

“Excellent coverage of some really interesting areas of science — at a very stimulating but accessible level,” read a comment from one DayCon attendee.

If the numbers are any indication, the public is eager for such events. DayCon was at capacity several weeks in advance and had a total of 65 attendees from Boston and Cambridge. Organizers are hoping to plan a similar event for next June.

The only way to combat misinformation and mistrust, said Guerra, “is by engaging with the public in as many ways as possible.”

David Cardozo, associate dean for graduate studies and the director of the Division of Medical Sciences at Harvard Medical School, whose office has helped fund SITN for several years, lauded the students’ creativity.

“If we encourage the students and support them in this but tell them go be creative … let your imaginations run wild, this is the sort of thing that happens. It wouldn’t have happened if it were directed by the faculty.”

Cardozo said the students share a passion for science and a sense of civic responsibility to dispel misconceptions.

“I think they think of it almost as a duty as citizens,” said Cardozo. “It’s wonderful.”