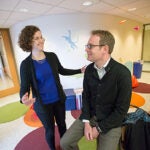 Having achieved promising results in proof-of-concept prototyping and experimental testing, a soft robotic glove under development by Conor Walsh and a team of engineers at the Harvard John A. Paulson School of Engineering and Applied Sciences (SEAS) and Wyss Institute for Biologically Inspired Engineering could someday help people suffering from loss of hand motor control regain some of their independence.

Most patients with partial or total loss of their hand motor abilities due to muscular dystrophy, amyotrophic lateral sclerosis (ALS), or incomplete spinal cord injury report a greatly reduced quality of life because of their inability to perform many activities of daily living. Tasks often taken for granted by the able-bodied — buttoning a shirt, picking up a telephone, using cooking and eating utensils — become frustrating, nearly impossible feats due to reduced gripping strength and motor control.

The stage is now set for that to change, however, thanks to Walsh’s expertise in soft, wearable robotic systems and a development approach that involves the glove’s potential end users in every step of testing and development. The holistic approach ensures that technology development goes beyond simple functionality to incorporate social and psychological elements of design that promote seamless adoption by its end users.

“From the start of this project, we’ve focused on understanding the real-world challenges facing these patients by visiting them in their homes to perform research,” said Walsh, an assistant professor of mechanical and biomedical engineering and founder of the Harvard Biodesign Lab at SEAS, and a core faculty member at the Wyss Institute. A team of undergraduate students contributed to an early glove design as part of his ES227: Medical Device Design course.

Wyss Technology Development Fellow Panagiotis Polygerinos and Kevin Galloway, a mechanical engineer at the institute, incorporated patient feedback at every stage of development in an effort to maximize the glove’s potential for translation.

“Ultimately, patients have to be comfortable with wearing the glove,” said Galloway. “In addition to glove function, we found that people cared about its appearance, which could have a big impact on whether or not the glove would be a welcome part of their daily routine.”

Walsh’s team adapted the mechanics to make the glove feel more comfortable and natural to wearers. Over several iterations of design, the actuators powering movements were made smaller and were modified to distribute force more evenly over the wearer’s fingers and thumb. The resulting soft, multisegment actuators, which are composite tubular constructions of Kevlar fibers and silicone elastomer, support the range of motions performed by human fingers. The glove’s control system is portable and lightweight and can be worn using a waist belt or attached to a wheelchair.

Now, the team is working to improve control strategies that will allow the system to detect the wearer’s intent. One potential solution is to leverage surface electromyography using small electrical sensors in a cuff worn around the forearm. The electromyography sensors detect residual muscle signals fired by motor neurons when the patient attempts a grasping motion and could be used to directly control the glove.

“We are continuing to test the design of the soft robotic glove on patients, in relation to making it customizable for the specific pathologies of each individual and understanding what control strategies work best — but we’re already seeing a lot of exciting proof-of-concept experimental results,” said Walsh. “The current goal is to refine the overall system sufficiently so we can begin a feasibility trial with multiple patients later this year.”

Walsh and his team have been helped in their work by George Whitesides, Harvard’s Woodford L. and Ann A. Flowers University Professor, and SEAS’s Robert Wood, Charles River Professor of Engineering and Applied Sciences, who are also Wyss core faculty members.

Down the road, the team is interested in developing the glove into a rehabilitation tool for various hand pathologies, and in extending the glove’s assistive functions beyond the joints in the hand toward the development of soft robotic systems that aid impaired elbow and shoulder movements, as well.