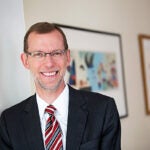 A few hours after Douglas W. Elmendorf was named the John F. Kennedy School of Government’s new dean, he was surrounded by old friends and new at a reception atop the Harvard Kennedy School (HKS), in a kind of festive gathering of the clan.

Elmendorf, A.M. ’85, Ph.D. ’89, is a prominent economist and a former Harvard faculty member who recently finished as director of the respected U.S. Congressional Budget Office (CBO).

The afternoon welcome drew a couple of hundred faculty and staff members, Harvard’s president and provost, and three HKS deans — one incoming, one outgoing, and one acting to fill the six-month gap between the other two — to the School’s Taubman building. That the event, long on smiles and with a buzz of excitement, came together on just a few hours’ notice was a testament not just to Elmendorf’s selection but also, Harvard President Drew Faust said, to the strength of the community that he will lead.

Elmendorf’s session with the HKS community seemed as much homecoming as introduction for a man who received his advanced degrees in economics at Harvard. Before heading to Washington, D.C., Elmendorf had been an assistant professor here, teaching Harvard College’s landmark introductory economics course Ec 10. During his tenure in the capital, he also worked with several former Harvard faculty colleagues as they served in different posts there.

Elmendorf will take over the School’s leadership in January. Archon Fung, the Ford Foundation Professor of Democracy and Citizenship, will be acting dean from July 1 until Elmendorf begins his duties. Outgoing Dean David Ellwood, Harvard’s longest currently-serving dean, announced last fall he will step down June 30.

In her welcome, Faust described Elmendorf as someone committed to enlightened public service and public policy, with a wide-ranging intellect and curiosity, and with personal characteristics that prompted his former colleagues to say they “treasured” the opportunity to work with him.

“He’s also someone who cares deeply about enabling others to do their best work. When you talk to him, you’re going to sense right away: It’s not about him, it’s about the institution and the people he’s dedicated to serve,” Faust said.

Elmendorf also offered brief remarks, saying he was “thrilled” at the opportunity to become HKS dean. When he left the CBO recently, he said, he expected his next challenge to be one with less pressure, drawing laughter from the crowd. But for someone who believes in the potential of public policy to improve people’s lives, he added, the opportunity was irresistible.

To be effective, Elmendorf said, governments need both creative ideas and good people to carry them out. HKS, he said, is one of the pre-eminent places anywhere with both.

“I am very optimistic about the power of good public policy to make people’s lives better, and I’ve seen in Washington that the key ingredients for good public policy are innovative ideas and outstanding people to put those ideas into practice. Both parts are needed,” Elmendorf said. “The Kennedy School is the best place I know in the world to find the right people and the right ideas.”

Elmendorf inherits a School that has been growing rapidly despite tepid economic times. It more than doubled its financial aid during Ellwood’s tenure, to $23 million from $11 million per year, and is in the midst of a $500 million fundraising effort, part of Harvard’s larger Capital Campaign.

HKS has also embarked on a $125 million renovation and expansion, which will add 91,000 square feet of space, an increase of 30 percent. The effort will raise the School’s sunken courtyard, putting the campus driveway and loading dock underground. Among other things, the project will add community space, including a winter garden, a student lounge, conference rooms, and a 200-seat dining room.

Ellwood, the Scott Black Professor of Political Economy, welcomed Elmendorf during what Ellwood said likely will be his last public remarks as dean. Ellwood, appointed dean by then-President Lawrence Summers in 2004, announced last fall that he would step down to return to teaching and research.

Elmendorf, who received his bachelor’s degree from Princeton University in 1983 before coming to Harvard, led the CBO from 2009 until earlier this year. The CBO directorship capped a long career serving in several top government economic agencies. The CBO is responsible for providing nonpartisan budget and economic analyses for Congress.

After receiving his doctorate, Elmendorf served as an assistant professor of economics at Harvard for five years, co-teaching Ec 10 with Martin Feldstein, the George F. Baker Professor of Economics.

Elmendorf first worked as a CBO analyst from 1993 to 1995, moving to the Federal Reserve Board from 1995 to 1998. He worked as senior economist for the Council of Economic Advisers from 1998 to 1999, and as deputy assistant secretary for economic policy in the Treasury Department from 1999 until 2001. He returned to the Federal Reserve in 2001, serving as chief of the macroeconomic analysis section and as assistant director of the research and statistics division until 2007.

From 2007 until he joined the CBO in 2009, he was a senior fellow in economics and Bernstein Scholar at the Brookings Institution. From 2008 to 2009, he was director of the Hamilton Project, which focuses on creating innovative policy proposals to stimulate economic growth.

Robert Stavins, the Albert Pratt Professor of Business and Government, has known Elmendorf since they were both graduate students in economics here. Stavins, who served on the search committee, said Elmendorf has roots in three key areas important at the School: in research, in teaching, and as a consumer of research.