A dearth of nutrition in school lunches 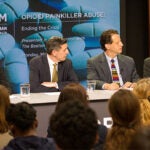 U.S. school cafeterias are starved for funds, lack facilities, and are staffed by workers who often know more about wielding “box cutters and can crushers” than chefs’ knives, according to Ann Cooper, a onetime celebrity chef turned Colorado lunch lady and school food reformer.

Cooper, speaking at a Harvard conference on food in public schools, said schools should work to serve nutritious, wholesome foods, with plenty of fruits and vegetables, rather than the packaged and processed foods that are prevalent in many institutions. Part of the challenge, she said, is money. When more than half of a school district’s cafeteria budget goes toward personnel, it’s tempting to opt for prepackaged food that requires little preparation.

But epidemics of diabetes and obesity prove that the choice is a false one, Cooper said. Both conditions, which cost some $250 billion annually to treat, have their roots in an unhealthy diet. To address the school food portion of the problem and how it affects young lives, she said, will require significantly more money for facilities — many schools today don’t even have kitchens — staff training, and fresh, whole foods.

Cooper called on every school to start a garden to help students understand where their food comes from, and for nutrition and food literacy to be a core part of the curriculum, not an add-on to an occasional health class.

Despite tight federal budgets, Cooper said that America should invest in school food programs because diet is so important to child health. The federal government, she said, spends less on school meals per pupil than most people spend on coffee each day.

“It’s not that we don’t have the money; we are choosing not to prioritize our kids’ health,” said Cooper, who is director of food services for the Boulder Valley School District and founder of the Chef Ann Foundation, which works on national school food reform.

Cooper was the keynote speaker Wednesday at an all-day conference on the foods served in the nation’s public schools. The conference was sponsored by Harvard University Dining Services, the Massachusetts Department of Elementary and Secondary Education, Project Bread, the Greater Boston Food Bank, and the Let’s Talk About Food program.

After a brief welcome by David Davidson, managing director of Harvard University Dining Services, Let’s Talk About Food founder Louisa Kasdon said the organizing groups’ interest in improving the quality of school food grew out of a broader interest in diet and the U.S. food supply. School nutrition, she and other event organizers thought, was a topic that should be readily addressed.

“How hard could that be?” Kasdon said, sparking laughter among the almost 200 people gathered in Harvard’s Sever Hall.

Instead of the easy task they expected, she and others found it a difficult fight to change school food offerings, which the critics rapidly learned is the most regulated aspect of the nation’s food system.

The speakers addressed a variety of issues, including federal policy, the business of school food, what kids now eat at school, links between diet and cognition, and models of change.

Emily Broad Leib, director of Harvard Law School’s Food Law and Policy Clinic, said that Congress is now considering reauthorization of the Child Nutrition Act, which expires in September. Among other things, the act provides nutritional guidelines for school lunches, and must be reauthorized every five years. The last reauthorization, in 2010, took significant steps toward improving the nutritional quality of school lunches, Leib said. Possible changes this time include increasing the amount of federal reimbursement for meals, taking steps to increase student participation in the program, and providing grants for kitchen equipment and staff training.

The school nutrition program is so large — 30 million children eat school lunches daily — that the stakes extend beyond America’s schoolyards, Leib said. Changes to the food program can influence the broader U.S. food system, which is facing a host of its own related challenges.

The heavy lifting doesn’t have to occur just at the national level. While the federal government provides a broad framework, state and local governments have wide latitude in determining the final form of school food programs, according to Bettina Neuefeind, a research fellow at Harvard Law School who collaborates with the Harvard Food Law and Policy Clinic.

Neuefeind said the clinic has worked with Project Bread to create a “school food interventions toolkit” that includes an array of suggestions on how to improve school foods. She discussed just a few of them, including proven ways to “nudge” students into making good food choices, emphasizing food literacy, and paying attention to what are called “competitive foods,” those sold to students outside the national food program, in cafeterias, or at school-related events.

Efforts to improve school food have generated backlash, with some critics complaining that kids throw away the food they don’t like. That, Cooper said, is a problem that’s up to adults to solve by setting rules and guidelines for what kids eat. It hasn’t been that long, she said, since the days when there was no such thing as “kid food,” just food that kids ate with the rest of the family or they went hungry.

“No child has ever died for lack of chocolate milk and chicken nuggets,” Cooper said.