A brighter future together 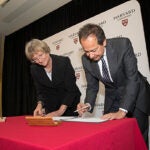 “First, I want to engineer the fastest car in the world,” said Amaj Mays, who also wanted to study aerospace engineering “and build a spaceship.”

“I want to be someone,” said Stanley Charles. “In 10 years, I’ll be in college, and then I’ll go on to medical school. I want to be a doctor.”

The boys, both seventh-grade students at the Curley K-8 School in Jamaica Plain, were at Harvard for the 2015 Dynamic Young Men’s Leadership commencement celebration. The public schools initiative focuses on empowering young black and Latino men, encouraging them to pursue their dreams, and working closely with teachers and parents to provide students with tools for academic and professional success.

The power of the organization, said Carroll Blake, executive director of the achievement gap for the Boston Public Schools’ central administration and an adviser to the leadership initiative, lies in building a community of leadership across Boston. Holding the eighth grade commencement celebration on Harvard’s campus drives home the importance of college, helping the young men “know that college is for them,” he said.

“You can see their energy, that excitement,” Blake said. “I think that’s one of the most powerful things this program has done. It’s getting them engaged in their own learning. These young men are waiting for someone to realize how smart they are, to realize that they have a talent to offer. They’re learning positive things about who they are, they’re learning leadership skills, and learning that we see them as leaders, and we set high expectations academically. They are scholars.”

Kevin Casey, associate vice president for Harvard Public Affairs and Communications, was on hand to receive an award in honor of Harvard’s ongoing partnership.

“We at Harvard are so proud to be a part of such a meaningful partnership between the University and Boston Public Schools,” said Casey. “I was thrilled to welcome such talented young men — and their families and mentors — to campus to recognize their hard work and accomplishments.”

The event, which offered programming for parents as well as students, included workshops on critical thinking, entrepreneurship, and positive thinking, attracting students from schools such as the Horace Mann School for the Deaf and Hard of Hearing in Allston and the Mary Lyon K-8 in Brighton. Student groups from each school also gave presentations at the event, celebrating their achievements and hopes for their future.

“Harvard’s involvement has been great,” Blake said. “Many of these students have the potential to go on to college, to go to Harvard. Being here on campus, to know that it’s not just across the river but that it’s open to you, makes a big difference. And if they don’t attend Harvard, it’s still important for them to know: College is for you. That future is for you.”