With experience at his fingertips 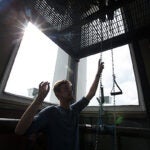 The sound of victory

George Koo’s fierce drive to carve out a better life for himself is leading him to help others improve their lives, too.

At age 57, the New York financial expert graduates from the Harvard Extension School with a master’s in international relations. The degree and his training will be a springboard, he hopes, to a second career helping to guide policy issues touching on global poverty and social conflict. “If the U.S. is the spark that encourages large-scale economic change,” said Koo, “then the policies that we institute here could affect policies around the world.”

For his thesis, Koo analyzed 11 years of data and used complex logistical regressions to tease out the economic drivers of such things as war, terrorism, and social unrest in roughly 200 countries.

During his first career as a successful portfolio manager and investment banker, Koo had a front-row seat for the 2008 economic meltdown and its aftershocks. “I realized then that I really needed to truly understand how finance could affect people who lost their homes during the crisis,” he said, “and more about economic and social development in the U.S. and around the world.”

When his wife of 28 years lost a long battle with cancer, he decided to change his life. At Harvard, he immersed himself in his studies. The immersion, Koo said, helped him grieve, and hope. (He has since remarried.)

Koo’s desire for economic justice has deeply personal roots. He watched his single mother struggle on welfare and later work two jobs to support her her five children and send them to school. He started work at age 7, he said, washing dishes in a local restaurant and doing odd jobs. He rowed boats for tips in Central Park. And he discovered the New York Public Library. There, in the grandeur of its stacks, he realized: “This is my ticket out of poverty.”

His mother reinforced the value of education. “She provided me with the vision that life could be much better than what we were experiencing,” said Koo. “She would always say, ‘There’s a great school in Boston called Harvard.’”

Koo embraced math and statistics in college, graduated from St. John’s University with an accounting degree and an M.B.A., and then headed to Wall Street, where he settled in. Twenty-five years later, he arrived at Harvard.

“Manic” is how he describes his weekly visits to Cambridge for the past three years, while he continued to run his Long Island investment firm. But Koo wouldn’t have missed learning from the “best scholars in the world,” diving into Harvard’s libraries, and, above all, engaging with his classmates, two of whom he hired.

He said Harvard students “are wired differently. They are wickedly smart and passionate about learning. They are thinking beyond beyond,” and not just about making money, but about “making a difference.”

Koo’s new wife and two children from his first marriage will see him graduate.

His mother recently passed away, but she will be with him in spirit, he said. “I fulfilled the vision that my mother had that I would be graduating from Harvard.”

Now he wants to fulfill a promise to himself “to make a major contribution to this world before I leave it,” and to inspire others to do the same.