When your calling comes calling 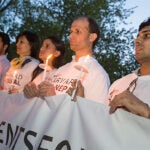 United in grief and action

For Megan Diamond of the Harvard Chan School, the goal is to undercut sickness in Africa

It took Megan Diamond some time to find her calling in epidemiology, and, frankly, the delay bothered her.

With her father a dedicated biochemist and a sister always wanting to be a doctor, Diamond thought she’d somehow know what she wanted to do, and the hard part would be just following that path. But it wasn’t that easy.

Diamond, who is graduating from the Harvard T.H. Chan School of Public Health, found the start of her path as an undergraduate at the University of Illinois. She was drawn to sociology and biology, two fields that don’t naturally fit together. So she studied them apart.

“A lot of people thought it was strange, but I was doing what felt right,” Diamond said. “They were never integrated; I was just studying them simultaneously.”

It took Diamond a few years — during which she interned at a think tank, graduated, traveled, and worked at a nonprofit that helped veterans with health problems — to find the right fit. Her interests crystallized into epidemiology, which targets diseases and their spread, when she began researching graduate programs in public health.

“I felt I had my moment, that it’s finally my turn,” Diamond said. “It was just a natural progression of aging and life. You have to be patient with yourself.”

During her two years at HSPH, Diamond has worked on Africa’s first longitudinal health study, the Africa/Harvard School of Public Health Partnership for Cohort Research and Training, or PaCT. Currently in a pilot phase, the study will provide a long-running snapshot of health on the continent, much as the Nurses’ Health Study and its follow-ups have in the United States.

In such studies, participants answer questions about lifestyle and health periodically, providing a long-term view of the effects of diet, smoking, exercise, alcohol use, and other variables. The African study should provide information about health in the countries providing data, and illuminate a broader transition in disease burden, as increasing rates of noncommunicable ailments such as heart disease and diabetes add to the existing infectious disease burden.

“It’s a unique time, when things are shifting. We’re trying to explore that,” Diamond said.

Diamond has worked with data from the study and also traveled to Tanzania last summer as a Rose Traveling Fellow to collaborate with a physician at Muhimbili National Hospital on a paper about diabetes, based on the data. The trip was helpful in part, she said, because it brought home the importance of the people behind the numbers.

“It puts faces to the problems, and you understand the importance of what you’re doing,” Diamond said.

After graduating, Diamond hopes to work overseas, perhaps on a project that supports smartphone penetration in developing nations, providing a tool to conduct research and promote health. Though her future isn’t set, Diamond is confident she’ll figure it out yet again.

“You can’t always predict what will come next. You have to just keep moving.”