The roots of artistry 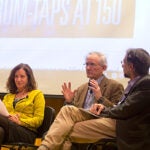 Radcliffe installation upends our sense of a simple poplar

Artists eager to capture earth’s beauty know that Mother Nature often hides her wonders from easy view. But a clever new exhibit at the Radcliffe Institute for Advanced Study is bringing some of that organic beauty out of the shadows.

Rosetta Elkin’s “Live Matter,” organized in collaboration with Radcliffe’s Academic Ventures arts program and on display in Byerly Hall through May 29, transforms the ordinary into the extraordinary through a simple shift of perspective.

Visitors to Byerly’s Johnson-Kulukundis Family Gallery will get a rare look at the complex and creative architecture of plant life typically hidden underground. Suspended by an intricate latticework attached to the gallery ceiling is part of the mature root system of a white poplar, Populus alba in Latin

“I wanted to extract a root system in order to highlight its beauty,” said Elkin, assistant professor of landscape architecture at the Harvard Graduate School of Design. “The exhibition is taking a view on live matter, plants, trees, that is never taken.

“I hope people take away an appreciation for the aliveness of the plant world,” she added, “and the mystery.”

The section of the root system was delicately extracted from a poplar at Harvard’s Arnold Arboretum. Elkin worked closely with the arboretum staff, using an air spade (a tool that blasts away the soil with pressurized air while keeping the roots intact).

An artist whose preferred medium was silkscreen, Elkin’s 2-D fascination became 3-D once she discovered landscape architecture after college. From then on, she “couldn’t work without space.”

Her professional projects have involved large-scale ventures: master plans, vegetation research in North Africa, and even a green reimagining of the headquarters of China’s Shenzhen Stock Exchange. But in such extreme urban or drought-affected environments, said Elkin, “It’s not about planting, but cultivating. It’s a very different set of operations, and it gave me a great appreciation for aliveness.”

Such big projects, which often involve large teams of architects and specialists, also gave her an appreciation for a smaller scale. For the past five years, she has turned to such projects for her installations. Her operating rule is: “Can I lift it? Can I move it? I need to be able to do the work myself.” For an installation at Boston’s Isabella Stewart Gardner Museum titled “Tiny Taxonomy,” Elkin offered up an inventory of some of the forest floor’s smallest plants for viewers to inspect at eye level.

Elkin hopes to shift the botanical narrative with her scaled-down approach to the seemingly ordinary. Scientific botany, with its measureable classifications, quantifiable data, simplification, and regularity, provides a “singular perspective that raises awareness of what we can do with plants, rather than what plants are actually doing,” notes her exhibit’s accompanying catalog.

Elkin is fascinated with the white poplar because of its capacity to clone itself endlessly. The tree sprouts its spindly root systems, consisting of long and fibrous fingers, in perpetuity. Its robust reproductive cycle makes it unpopular with homeowners, but it’s a botanical wonder to Elkin.

“This individual mother sends out roots not only to gain nutrients but also to reproduce,” Elkin said of the roughly 80-year-old poplar — still thriving in the arboretum — that yielded a part of its root system for the show. “Genetically, it’s exactly the same as the mother plant … it’s an everlasting, endless loop of the same kind of immortality of this plant that is just so successful that it tends to dominate.”

Elkin’s desire to shift people’s perspectives by highlighting the inherent beauty in living things is mirrored in her show catalog. Paired with images and text are comments and quotes from a range of scholars who “write with a deep appreciation for the aliveness of the plant.”

One of her favorite quotes appears at the beginning of the guide. It’s a line from the Austro-Hungarian botanist Raoul H. Francé, who wrote: “Form is but the track left by life.”

“It takes a particular kind of botanist,” said Elkin, “to write that line.”