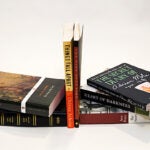 The books that shaped them

What if there was a computerized matchmaking service that promised to scan millions of profiles around the world to find the perfect person for you to marry — would you use it?

What if there was a machine to identify likely criminals — would it be OK to make an arrest before the crime happens?

A group of students from China, Japan, and the United States — including four from Harvard — grappled with those questions and others this month in a discussion led by Anne T. and Robert M. Bass Professor of Government Michael Sandel. But the discussion wasn’t in Sandel’s famed “Justice” class on the Cambridge campus. Instead it was thousands of miles away, in a Tokyo TV studio run by NHK, Japan’s public broadcasting station.

“It was awesome; I feel like it was a great way to finish out my Harvard career,” said Andre Souffrant ’15, a neurobiology concentrator from Leverett House.

Souffrant was accompanied in the Harvard group by Tyler Parker, Eva Stojchevska, and Masahiro Kusunoki. The other four U.S. students came from the Massachusetts Institute of Technology. Eight students from China and eight from Japan joined the Americans.

The Harvard quartet said they jumped at the chance to re-engage in the kind of ethical debates that had marked their experience in Sandel’s class last fall. The course, “Money, Markets, and Morals,” broadly asked, “What should be the role of money and markets in a good society?”

This most recent session was part of an ongoing relationship Sandel has with NHK, which has produced about a dozen similar programs over the last three years. Each show, he said, takes an issue of public interest and examines the ethical debate around it. Previous discussions have explored topics such as equality and inequality, and contested memories and collective responsibility.

Harvard students and their peers examined ethical issues related to the advance of technology, including human cloning, artificial intelligence, and genetic engineering.

“What are the ethical challenges that arise in a world where artificial intelligence and smart machines are playing a greater role?” Sandel said. “What are the proper uses of biotechnology and genetic breakthroughs? Should they be used only for medical purposes or also to make healthy people stronger and smarter?

“These are questions our society should be debating and reflecting on, but which are too rarely thought through in public. The result is that today people have a sense that science and technology are moving faster than moral understanding. This is an attempt to ease the gap between science and the humanities, and to prompt debate about how technology can promote health and human flourishing rather than dehumanizing scenarios.”

NHK flew the students to Tokyo for the early May filming, which occurred across two segments of 1½ to two hours each. The students’ diverse perspectives were rooted not just in their homelands, Sandel said, but also in their different fields of study. The film will be edited down to two 50-minute shows to air in early June, Sandel said.

“I was very impressed with the depth of the discussion and the spirit of engagement among these students from different cultural and disciplinary backgrounds,” he said.

Stojchevska ’15, a government concentrator from Winthrop House, said that her experience in “Money, Markets and Morals” led her to jump at the chance to participate in the Tokyo debate.

“I really loved my time in the class and this seemed like a good extension of the class. I wanted to go right away.”

Souffrant said he noticed the influence of students’ different backgrounds in their answers. In response to the question about having an algorithm select a mate, for example, the MIT students seemed to him much more comfortable letting the computer do the work. The students from China seemed reluctant to do so, even those studying science, he said.

Parker ’17, a government concentrator from Leverett House, said the trip was a “fantastic” experience, and that he enjoyed being with a high-intensity group of fellows. Parker said he had two papers due while he was traveling — one he finished on the plane, the other while in Tokyo. Nonetheless, he was glad for the opportunity to join the conversation.

“It’s important to have ethical and moral debates in our society, on everything from the prison system to education,” Parker said. “To me personally, this represents what Harvard is all about.”