Recognized as a force for change 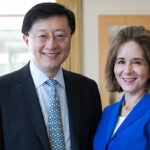 Engaging with the Harvard alumni community

“We present the Radcliffe Medal to an individual who has been a powerful and impressive force for change, someone who takes risks and forges ahead. These are hallmarks of Radcliffe.”

Lizabeth Cohen, dean of the Radcliffe Institute for Advanced Study, made this statement in announcing that Ruth Bader Ginsburg, associate justice of the Supreme Court of the United States, is this year’s Radcliffe Medal recipient. Ginsburg will be honored at a luncheon on May 29 during Radcliffe Day, an annual celebration of Radcliffe.

“Throughout Justice Ginsburg’s career, she has worked to advance equality and justice. On Radcliffe Day, we honor her values and her impact as a litigator, judge, and justice,” said Cohen, who is also the Howard Mumford Jones Professor of American Studies.

The luncheon will include remarks from retired Associate Justice David H. Souter ’61, LL.B. ’66. Kathleen M. Sullivan, J.D. ’81, will conduct an in-depth conversation with Ginsburg about her work as an advocate and a jurist. Sullivan, a former professor of law at Harvard and Stanford universities and a former dean of Stanford Law School, is currently a partner at Quinn Emanuel Urquhart & Sullivan LLP.

Roughly 1,000 people are expected to attend Radcliffe Day events. The morning panel, “A Decade of Decisions and Dissents: The Roberts Court, from 2005 to Today,” will focus on the major trends and precedents of the U.S. Supreme Court under Chief Justice John Roberts and on the court’s relationship to Congress.

Moderated by Margaret H. Marshall, Ed.M. ’69, a former chief justice of the Supreme Judicial Court of Massachusetts, a senior research fellow and lecturer on law at Harvard Law School, and the 2012 Radcliffe Medalist, “A Decade of Decisions and Dissents” will feature the following panelists: