Ready to change the world 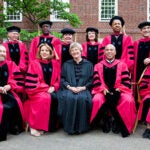 It’s one thing to apply, be accepted to, and attend Harvard. It’s another to do that while writing a successful book and helping shift the public discourse around health care.

That was the demanding path of Lauren A. Taylor, who arrived at Harvard Divinity School in 2012 with a book contract and an interest in global health partnerships.

Taylor’s 2013 “The American Health Care Paradox: Why Spending More Is Getting Us Less,” co-authored with Yale’s Elizabeth H. Bradley, argues that American health outcomes could improve significantly with greater investment in social services.

“We hit a zeitgeist in the public health world,” said Taylor of the popular work that landed her numerous speaking engagements, including spots on MSNBC and C-SPAN. “We are standing on the shoulders of decades and decades of public health research. It was a matter of reformulating a lot of that research for a 2013–2014 audience who were wrestling with what the Affordable Care Act meant, and U.S. health care spending being 18 percent of GDP.”

A national tragedy drew Taylor toward service. On Sept. 11, 2001, her father left home in Manhasset, N.Y., for his job at the World Trade Center. He survived unharmed, but dozens of people from their Long Island community lost their lives in the terrorist attacks. “I realized life can be very, very short and that I needed to figure out something to do with my life that felt meaningful.”

A joint degree program at Yale University allowed her to graduate in five years with a bachelor’s degree and a master’s in public health. Work with Bradley at Yale’s Global Health Leadership Institute followed. Then Taylor got stuck in academic limbo. Her interest in global health partnerships was “too conceptual” for Yale’s school of public health, she was told, and “too applied” for its philosophy department.

When friends suggested a divinity school at a big academic center, Taylor realized Harvard would be the perfect intellectual home, one that would support her varied interests. “I knew I could be successful here,” she said.

Convinced that Harvard was the right fit, she didn’t apply anywhere else. “If they’d rejected me,” she said, “I didn’t know what I was going to do — I guess collect myself and reapply.”

At Harvard, success has followed. In addition to writing her book, Taylor received a $25,000 grant from the Harvard Global Health Institute to study a collaboration between Pentecostal faith healers, “the main purveyors of mental health care,” and psychologists and psychiatrists in Ghana. She said her Harvard years also provided crucial insights. Being immersed in a supportive community of people who were constantly pushing her to define and defend her interests, she said, helped her to solidify them.

“It’s such a unique environment, having people press you on things that otherwise are considered totally out of bounds. The core sense of wanting to live a service-oriented life is really just crystal-clear for me now. I would not trade my time at Harvard Divinity School for anything.”

Having found her niche, Taylor won’t go far after graduation. She’ll pursue her Ph.D. in health management based at Harvard Business School. She said she is looking forward to continuing to collaborate with people from across the Harvard community who are, as she is, “ready to change the world.”