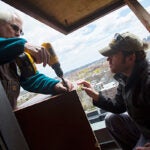 A home fit for a king

Even though Harvard researchers proved nearly a decade ago that natural selection can happen rapidly, the public consensus still tends to be that it takes a long time, even centuries, to take effect. As part of the Harvard Horizons Symposium, during an event organized by Harvard’s Graduate School of Arts and Sciences (GSAS), Ph.D. candidate Shane Campbell-Staton will discuss his work with the green anole lizard, which corroborates the fact that rapid evolutionary responses can be viewed in real time.

Finding ways to share the work of GSAS graduate students in the humanities, the social sciences, and the sciences, within Harvard and with the public, is a key aim of the Harvard Horizons initiative. Each year, a group of Ph.D. students is chosen to participate in an intensive mentoring program designed to help them communicate the substance of important academic work to a broad audience. The training culminates in the Horizons Symposium, where the scholars deliver five-minute talks about their work from the stage of Sanders Theatre.

This year’s symposium takes place on May 6 at 4:30 p.m., and is free and open to the public. Tickets are available at the Harvard Box Office and at the door.

Campbell-Staton’s focus is on organismic and evolutionary biology, working in the labs of Jonathan Losos and Scott Edwards. After graduating from Harvard in May, he will join the lab of Zac Cheviron at the University of Illinois as a postdoctoral student, where he will work on the genetic basis of aerobic performance differences in high- and low-elevation deer mice. In advance of the symposium, the Gazette asked Campbell-Staton to reflect on his research and his time at Harvard.

GAZETTE: How did you develop an interest in science?

CAMPBELL-STATON: As a child, I was fascinated with animals. I watched many nature documentaries, and fell in love with the strange and exotic creatures in mysterious parts of the world that I never thought I would have a chance to see. I would go outside and dig in the grass or look on trees for whatever I could find and pretend to do research and make nature documentaries of my own. As a matter of fact, the lizard I study now — the green anole — is the first animal I caught as a kid in South Carolina. In high school, I completed a project involving the natural history of reptiles and amphibians and decided I wanted to pursue biology as a career. I wasn’t exposed to a lot of science in the classroom throughout grade school, so I had a lot of catching up to do in college, but it was worth it. I haven’t turned back since.

GAZETTE: What question drives your research?

CAMPBELL-STATON: My research is driven mostly by a single question: How do species adapt to changing environments? I use several types of data to answer this question. A large part of my work looks for answers in DNA. By examining variation in genetic makeup between individuals from different places, it is possible to trace the history of a species through space and time and identify genes that have been the target of natural selection. Using climate data, I search for aspects of the environment that have changed the most throughout evolutionary history and serve as a source of natural selection. Finally, I conduct experiments to test how animals perform tasks important for survival under varying environmental scenarios.

By combining DNA, climate, and experimental data, I am trying to develop a clearer picture of how changing environments influence species formation, adaptation, and extinction. I have typically studied climate adaptation over thousands or millions of years, but I have recently focused on how species respond to sudden shifts in climate as a result of climate change over much shorter periods of time.

GAZETTE: Why is it important to study evolution?

CAMPBELL-STATON: The great biologist Theodosius Dobzhansky once wrote, “Nothing in biology makes sense except in the light of evolution.” I think this idea really drives home the importance of evolutionary biology. It is the foundation of everything we know about the living world. The organisms that produce the food we eat and oxygen we breathe, the diseases that affect us throughout our lifetimes, all are governed by evolution. It’s a major part of who we are and how we got here. It links us to every living thing that has ever existed throughout the history of our planet.

GAZETTE: Who do you think is conducting innovative research in evolution at Harvard?

CAMPBELL-STATON: Everyone! That is one of the greatest things about studying science at Harvard. There are so many people here pushing the boundaries of evolutionary biology, in almost every sub-discipline in the field. Within my department alone, many labs are sequencing the entire genetic makeup of organisms from every corner of the planet to identify the genes and genetic pathways responsible for producing major innovations across the tree of life. Other labs are tracing the history of migration and adaptation of ancient and modern human populations. Animal motion, game theory, deep-sea biology, the origins of animal and plant body plans, it’s all being done here. Even though the work is extremely diverse, it all boils down to single goal: understanding how life works and how it responds to a never-ending set of challenges to find its way through space and time. There is serious nerd power in this place, and it’s a pleasure to be a member of this community.

GAZETTE: Researchers have known for quite a while that natural selection can happen quickly. Why do you think most people still believe the process takes eons?

CAMPBELL-STATON: I think when most people envision evolution by natural selection they think of major innovations in the tree of life, like the tetrapod limb, the vertebrate eye, or powered animal flight. We can see through the fossil record that these adaptations formed over relatively long periods of time, but the process that has shaped them, natural selection, plays out generation by generation, selecting for minute variations that give their possessors a slight advantage and allow them to pass more copies of their genes on to the next generation. We know now that under the right conditions, we can catch natural selection in the act and study its effects over much shorter periods of time, even in a single generation.